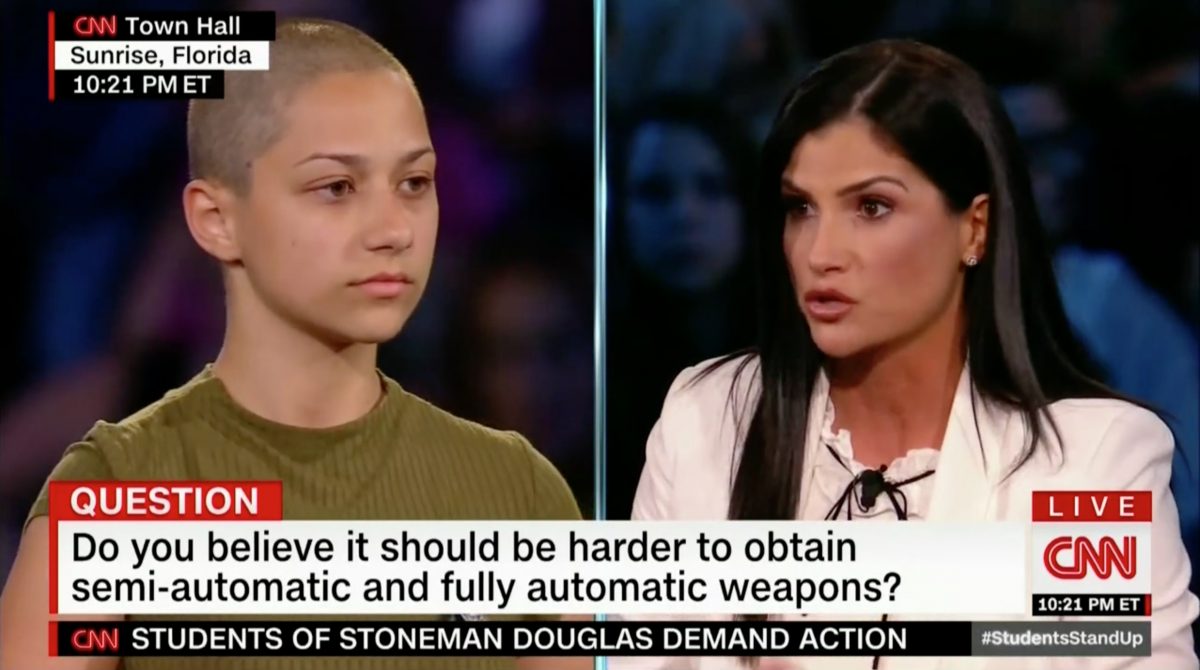 The big loser in CNN’s Wednesday night Town Hall to address the horrific shooting last week in Parkland, Florida was the NRA — by far. The NRA not only potentially lost a generation of young people as potential members but from the sound of the audience at the Town Hall last night, it’s fair to say that many view the NRA as the enemy. And they should.

The NRA and the politicians they’ve bankrolled value easy access to guns over their lives. And the audience last night filled with younger people — many of whom just last week were dodging bullets from an AR-15, a weapon the NRA fought to legalize after it was banned from 1993 to 2003 as part of the federal assault weapons ban — got that.

These high school students may be teenagers, but they know the deal. They fully understand the power of the NRA and how politicians are beholden to campaign donations. And that led us to one of the most compelling moments I’ve ever seen on this issue.

There was 17-year-old Cameron Kasky, who eight days ago was just living a normal teenage life when he was suddenly faced with being killed by a teenager armed with an AR-15. During this shooting, Kasky risked his life by protecting his autistic brother from the bloody rampage.

And last night Kasky stood up again for others in his generation who truly fear that a gunman will descend upon their school with weapon of war and slaughter them. He had a chance to ask Florida Senator Marco Rubio a question, a man who boasts an “A-plus” rating from the NRA and who has received over $3 million in donations from the organization.

Kasky first prefaced his question with comments that resonated with anyone who cares about saving American lives from gun violence: “This isn’t about red and blue. We can’t boo people because they are Democrats and boo people who are Republicans,” he said to applause. He then added, “Anyone who is willing to show change, no matter where they are from, anyone willing to start to make a difference is someone we need on our side here. This is about people making a difference to save us and people who are against it and prefer money.”

Right there Kasky had framed this perfectly: You either are about saving the lives of our children or you stand with the NRA who bankrolls your campaign. Kasky then asked the question of the night to Rubio: “So Sen. Rubio, can you tell me right now that you will not accept a single donation from the NRA in the future?”

The response from the audience was awe-inspiring. The venue exploded with people jumping to their feet as thunderous applause filled the hall. Rubio looked stunned. Rubio’s facial expression made it clear that he knew things were changing in American politics. Just like with the #MeToo movement’s impact on sexual assault and harassment, Rubio could sense that we are on the edge of a revolution in regards to reducing gun violence and that the gun politics of old would no longer be acceptable.

Rubio first responded with the cliché politician answer of how he simply votes how he believes and people support him for that. But Kasky wasn’t buying it. He pressed Rubio: “In the name of 17 people, you cannot ask the NRA to keep their money out of your campaign?”

And then we saw the impact of these teenagers firsthand as the NRA’s “A-plus” rated Rubio publicly broke from the NRA. Rubio declared that he would support raising the age from 18 to 21 for “buying a rifle,” a position the NRA opposes.

Later that night we saw another example of the test that the NRA and its politicians will be subject to in this new era. This time the question came from an adult, Broward County Sheriff Scott Israel. Israel was seated next to NRA spokesperson Dana Loesch, a person who in the past compared gun control efforts to Nazi and Stalinist propaganda and claimed that progressives “exploit mass shootings “as a tactic to take away law-abiding citizens’ gun.”

And again, the hall exploded in cheers. We again heard the sound of a political movement taking hold in America led by teenagers. That’s why we have seen vile people on the right attack these teenagers as “actors” and George Soros pawns. These right wingers fear these young people will succeed where adults have failed when it comes to gun violence.

The time has come for politicians to show us if they value the lives of our kids over donations from the NRA. A younger generation of Americans is watching to see whose side you are on.

Dean Obeidallah, a former trial lawyer, hosts SiriusXM radio’s The Dean Obeidallah show and is a columnist for the Daily Beast and a CNN.com Opinion Contributor.