McMurry: Obama Administration’s Plan Is to Not Take Putin Seriously

McMurry: Obama Administration’s Plan Is to Not Take Putin Seriously 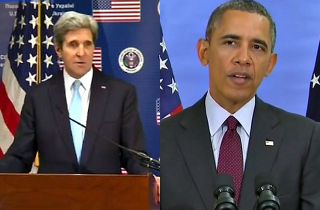 During simultaneous press conferences late Tuesday morning, both men sought to undermine the current image of Putin as a devious strategist who has outsmarted world powers to take control of the Crimean peninsula and threaten Ukraine. The Obama administration’s position is instead to treat Putin as a reckless hothead, one unnerved into action by mass democratic protests on his border rather than fired by global ambitions, and who’s impulsively pushed his country into a conflict that will quickly backfire.

Obama explicitly referenced the Putin-as-mastermind theory. “There is a suggestion somehow that the Russian actions have been clever strategically,” he said. “I actually think this has not been a sign of strength.”

Kerry was more devastating. Over a fifteen minute press conference, he obliterated every one of Putin’s arguments for moving troops into Ukraine, doing so not as a prosecutor but almost as a satirist, indicting Putin in tone as much as evidence. This was never more apparent than when Kerry’s jaw nearly hit the floor after MSNBC’s Andrea Mitchell told him Putin had claimed Russian troops were not in the Crimean peninsula. It was geopolitical pantomime: who could take this guy seriously?

Kerry’s methodical dismemberment of Putin’s claims made the international case against him, but it also served as an implicit rebuke of Putin’s status as brilliant operator of Cold War-era realpolitik. This is of a piece with the “Putin is Nuts” theory, which began with Angela Merkel’s comment over the weekend and now includes UN Ambassador Samantha Power and former Secretary of State Madeleine Albright. They are pointing out the gap between the nonsense coming from Putin’s mouth and his supposed ability to leverage Russia into the giant superpower of the Cold War.

They’re not far off. David Ignatius pointed out Sunday that Putin had bit off more than he could chew in Crimea, and Julia Ioffe thought Putin’s press conference showcased a much different Putin than the self-assured bear wrestler who so troublingly impresses U.S. hawks — suggesting the hasty military move was already undermining the confidence everyone else grants him:

Today’s Putin was nervous, angry, cornered, and paranoid, periodically illuminated by flashes of his own righteousness. Here was an authoritarian dancing uncomfortably in his new dictator shoes, squirming in his throne.

This is Putin as Act V Richard III. Obama and Kerry are signaling to the world that Putin only looks like he has an kingdom, but will only find himself in want of a horse.

Watch Obama’s comments below, via CSPAN: