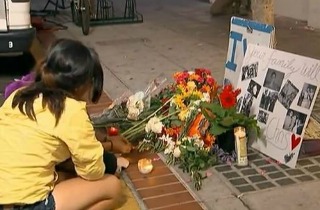 There were warning signs. Elliot Rodger, 22, had displayed aggressive behavior toward those he regarded as enjoying happily committed relationships. He had been seeing a therapist to whom he mailed a copy of his massive, 137-page memoir hours before taking six lives on Friday. When his mother became concerned about the disturbing YouTube videos Rodger was consuming and posting, she called mental health officials for help. They dispatched the police to Rodger’s home. “He was able to make a very convincing story that there was no problem,” Barbara County Sheriff Bill Brown said on Sunday morning’s Face the Nation on CBS, “that he wasn’t going to hurt himself or anyone else, and he just didn’t meet the criteria for any further intervention at that point.”

There was little that police could do. Displaying sociopathic tendencies, Rodger was reportedly able to disguise his murderous intentions and conform to societal standards when he wanted. The legal criteria an individual must meet before being involuntarily committed to a mental health facility ensures that only those who are construed as being “imminently” dangerous to themselves or others are detained. Once abused as a cruel, 19th Century tool for disposing of inconvenient individuals, involuntary commitment is now a contrivance deemed so uncivil that it joins mutilation and forced labor in its consignment to posterity.

The painfully obvious need for mental health reform highlighted by a rash of heavily publicized mass shootings in recent years is being opposed under the guise that it would transform law enforcement professionals into Orwellian “mind police.”

“Until we give law enforcement the responsibility to start locking up people based upon their thoughts, we are going to have situations like this take place,” MSNBC legal analyst and former FBI agent Clint van Zandt stipulated. You don’t have to be a civil libertarian to find that condition… undesirable.

Clinical assistant professor of psychiatry at the NYU Langone Medical Center, Dr. Sudeepta Varma, took a more nuanced position on the matter. She noted that, even if legal or mental health professionals could have spotted the signs that Rodger may have harbored violent intentions, it is not clear that his actions could have been prevented.

Maybe that is true, maybe it isn’t. But it seems like the right debate to be having. After so many deaths at the hands of violent, mentally disturbed young men, it seems appropriate that the country would have a discussion about the benefits and risks associated with making involuntary commitment laws more lax. But that’s not the debate we are having.

Instead, the nation’s social media activists took to forums like Twitter over the weekend where they proclaimed Rodger’s victimhood, and, by extension, their own.

In what is required reading this Tuesday, columnist Heather Wilhelm savaged the #YesAllWomen hashtag that exploded over the weekend and was declared by the usual suspects to be the most important intellectual exercise in which Western civilization has engaged since the Enlightenment. This hashtag, which began as a healthy way in which women who were genuine victims of sexual violence and gender discrimination could reclaim that experience from their abusers, quickly devolved into a gripe session about the ills associated with male-centric society.

Wilhelm observed that this vaunted hashtag was populated with complaints about the sexual harassment associated with men asking women to “smile,” feeling pressure to feign interest in the local grocery clerk’s inane banter, and McDonald’s Happy Meals defaulting to include the “boy” toy.

“Why, in our age of unprecedented plenty—and, at least in America, unprecedented power for women—is victimhood so appealing to so many?” Wilhelm asked. “When complete strangers were murdered on the West Coast, why do hundreds of thousands of people, healthy in body if not in mind, enthusiastically latch on, insisting that they were victims too?”

But there is something slightly more insidious in the mishandling of this hashtag’s formerly empowering and therapeutic properties. The notion that society’s approval of the kind of toxic masculinity which drove Rodger to mass murder creates a victim out of him as well. Indeed, that was Rodger’s own contention in his “twisted” manifesto: he suffered at the hands of the women who ignored him. While the participants in the #YesAllWomen disagree over who was victimizing this mass murderer, they agree with his premise that he was not solely to blame for his violent eruption.

Much like the “check your privilege” and “trigger warnings” movements, which have their roots in feminist academic thought, #YesAllWomen is yet another means of infantilizing women. It seeks to create a victim class of those with no claim to such status (though the shock of receiving a gender-specific Happy Meal toy likely endures). It robs both this deranged murderer of fault and places it on an omnipresent but virtually imperceptible societal phenomenon – imperceptible, that is, to the untenured laymen for whom identifying and decoding menacing societal phenomenon is not central to their careers.

When the priority response to a horrific act of violence like what occurred in California on Friday becomes absolving the killer of guilt, attacking social biases, and putting into question the only tools that might have allowed law enforcement to prevent this atrocity, it is safe to say that our priorities are ill-considered.