The One Law Democrats Could Write to End Gun Violence
Opinion

The One Law Democrats Could Write to End Gun Violence 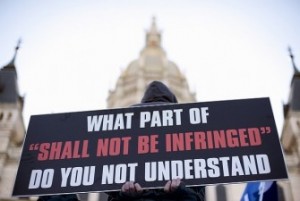 Chris Hayes is a genius. Or rather, I’m a genius, and Chris Hayes is my genius’ assistant. On Wednesday night’s All In, Hayes gave me the idea for a law that Democrats could write, that Republicans would almost have to vote for, that would end preventable gun violence in America forever.

One law, two provisions, half a page. No more preventable gun violence. Sound too good to be true? Stick with me.

President Obama‘s just-announced executive actions on gun regulation have had the effect of pushing Republicans to such an absolutist position on gun rights that they’re now essentially calling themselves tyrants. There’s one bridge that they’re not all willing to cross yet, but only because no one is putting them to the test. At the conclusion of an interview with Rep. Mo Brooks (R-AL) Wednesday night, Chris Hayes decided to hit him with one of those smug gotcha questions conservatives love us for, and he got an interesting response from Brooks:

Chris Hayes: My understanding is you have a concealed carry permit in Alabama. Should citizens and members of Congress be allowed to carry inside the US Capitol where you’re standing now?

Rep. Mo Brooks: I’m also one who believes in property rights, and the property owners has a say in when a person can or cannot bring a gun onto their own property, so that’s a debate we’re going to have to resolve…

Hayes: Right, but you control that property, would you support…

Hayes: Oh, okay, so you oppose it.

The beauty of Brooks’ response is that it forces him to acknowledge that at least some “law-abiding gun owners” do pose a threat, a fact that I facetiously highlighted in my commentary about the segment. This led Alabama conservative radio host Dale Jackson to question my sincerity on the ole Twitter, and I will admit, he had my number at first. Before yesterday, I never would have considered supporting a law like the one I now sincerely wish the Democrats would write and lobby for. Hell, I’ll write it, it’ll take me two minutes:

To require that law-abiding citizens be allowed to carry firearms into all accessible areas of the United States Capitol and The White House, and to require the District of Columbia to reciprocate all laws related to the possession and carrying of firearms, from all states and U.S. territories.

Be it enacted by the Senate and House of Representatives of the United States of America in Congress assembled,

Section 1. Open and concealed carry of firearms into all accessible areas of the United States Capitol and The White House

All visitors, tourists, and other law-abiding citizens shall be permitted to openly carry firearms into all accessible areas of the United States Capitol and The White House, or to concealed-carry firearms if they are permitted to do so by the laws of their state or territory of residence.

If Democrats proposed this bill and voted for it, they would force Republicans to either vote it down and trample on the rights of law-abiding gun owners, and explain to those gun owners why they are viewed as a threat, or they would have to pass it. Every Republican presidential candidate would have to explain why they do or don’t support it, why they are or aren’t afraid of the law-abiding gun owners they’re always saying they’re protecting when they block any and all regulation of firearms.

With all those Democratic votes, they wouldn’t even need to bigfoot that many Republicans into voting for it. In fact, I suspect Republicans would “call their bluff” and vote for it en masse, convinced that President Obama would veto it, and Democrats would uphold that veto in the final analysis.

Here’s the thing, though. It’s not a bluff. These people get to decide who gets to carry a gun around my kids wherever they go, even at school, so if the laws we have on the books are good enough for my children, they ought to be good enough for Congress and the President. Hell, they should be better, because as Brooks pointed out, those guys all have tons of armed security around. My kids have one cop, only when they’re at school.

I’d be willing to bet that if they were forced to share space with the law-abiding gun owners and their guns, our leaders would very quickly become a lot more choosy about which laws those gun owners had to abide by.