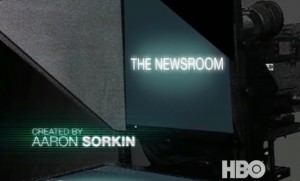 At least, that’s how it feels. The Aaron Sorkin-created drama The Newsroom debuts on HBO tonight, amid horrible buzz that’s been building like a series of town hall meetings in cranky beehives. Particularly harsh on Sorkin’s latest have been the folks who inhabit the real-life media waters in which the show’s characters swim, but after watching the first episode of The Newsroom, I find myself in respectful disagreement with my learned colleagues.

The Newsroom tells the tale of Will McEvoy, a Jeff Daniels-portrayed cable news anchor who creates a stir when he goes off his meds (figuratively) and tells an audience of cellphone camera-wielding college students that America isn’t the greatest country in the world. That epiphany is aided by the vision of a long-lost executive producer who broke his heart, and whom Sorkin-aided fate thrusts back into his life. Along the way, the show sets out to Save Journalism As We Know It.

For a great rundown of how The Newsroom fails at that mission, you couldn’t do much better than Jake Tapper‘s New Republic review of the show, most of which I agree with. Tapper complains that “McAvoy—and, by extension, Sorkin—preach political selflessness, but they practice pure partisanship; they extol the Fourth Estate’s democratic duty, but they believe that responsibility consists mostly of criticizing Republicans,” as if it couldn’t possibly be objectively true that Republicans are wrong about everything.

But he nails the rest of it, and therein lies The Newsroom‘s biggest problem: it fails at Saving Journalism As We Know It, but as Aaron Sorkin shows go, it’s top-notch.

If you like Sorkin’s too-smart, too-ambulatory banter, and the live-wire way in which his characters reveal their creator’s psyche, you’ve also probably cringed at them, too. While Tapper identifies several journalism moments that ring true, the show is at its most revelatory in the moments that ring uncomfortably, emotionally true. When Daniels’ McEvoy disdainfully dresses down a member of that college audience, Sorkin knows it’s supposed to make people dislike McEvoy, but also that he’s right, she is a dumb “sorority girl.”

The show also features the usual ensemble of crackerjack actors, another thing that people take for granted about Aaron Sorkin shows.

What people always forget when there’s a new Aaron Sorkin show is that without it, there’d be no Aaron Sorkin shows on TV, and that’s a bad thing. Sure, Studio 60 On The Sunset Strip failed at bearing any relationship to reality, and was more self-important than a solipsistic janitor, but I’d still rather watch a Studio 60 rerun than 90% of what’s on TV now. In fact, what show couldn’t benefit from a little Sorkinization? Who wouldn’t watch The Walking and Talking Dead? (Him: “Don’t go near that guy, he’s a zombie!” Her: “Well, at least he wants me for my brains!” Him: “I guess even a zombie enjoys a light snack now and again.”)

In the early nineties, there was a show called Twin Peaks that completely took over pop culture for a minute, until people got fed up waiting to find out who killed Laura Palmer, then stopped caring as soon as they found out. History won’t record the identity of the killer, but it will remark, in amazement, “David Lynch had a TV show? And people didn’t watch it?”

Tapper also notes, correctly, that Sorkin shows sometimes need time to hit their stride, and the good news is that The Newsroom is on HBO, not NBC. The cable net is much more patient with new shows than the nictitating programmers at the broadcast networks, and if The Newsroom hits the same numbers that got Studio 60 canceled, it’ll be a big hit.

(The Newsroom premieres this Sunday at 10pm on HBO.)