The Only Question That Matters in Chris Christie’s Bridgegate

From pretty much the minute Chris Christie‘s Bridgegate scandal broke wide open, the news media’s coverage of the story has been a major topic of debate, with much of the focus on the volume of  coverage. At first, it was Fox News that drew criticism for practically ignoring a huge breaking news story, but as the last nine days wore on, it began to look as though Fox’s competitors were swinging way too far the other way.

One way to measure the volume of the coverage (a clumsy, but handy one) is to search mentions of “Chris Christie” in the nine days since the scandal broke wide (to people other than Rachel Maddow), and compare that with the preceding nine days. Here’s how the three cable news networks stack up: 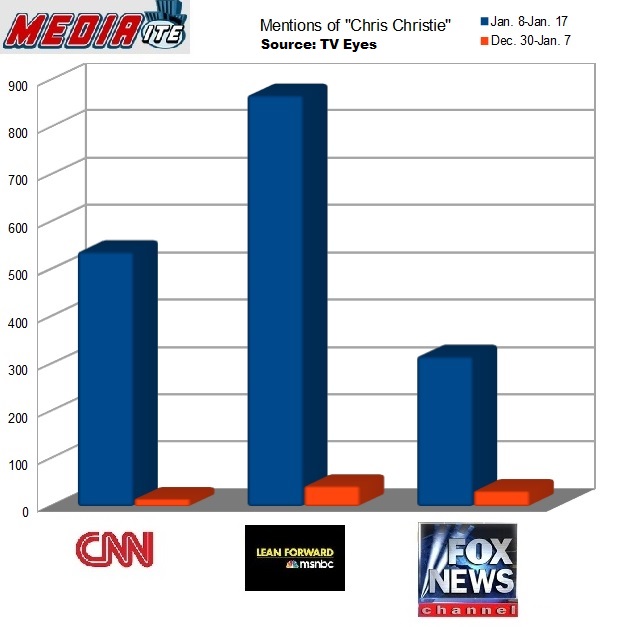 The competing narratives on the media’s coverage of Bridgegate are either that Fox is ignoring a super-important scandal, or that MSNBC (and to a lesser degree, CNN) are going overboard on a nothingburger that voters don’t care about. Fox’s performance in the opening day of the scandal, devoting 14 minutes over 4 segments to a scandal that could end Christie’s presidential ambitions and/or career, looks like proof of the former, while the chart above literally shows that MSNBC has a hard-on for Christie.

But the overwhelming quantity of coverage doesn’t mean that they’re covering the scandal too much; rather, it’s an indication that they may or may not be covering it well. There are avenues of inquiry, and fresh observations to be made, about this story, but in the gaps between new developments, too much of the coverage has been repetitive. Some of that repetition was downright infuriating, like the oft-repeated, “no poop, Poirot” observation that “If emails emerge directly connecting Christie to the lane closures, then he’s really in trouble.”

Some of it was actually helpful at first, like MSNBC host and David Wildstein authority Steve Kornacki, who quickly became a human pop-up ad on all of MSNBC’s shows. Kornacki’s deep knowledge of New Jersey politics, however, makes it worthwhile to stick with him. Rachel Maddow, who has been on this from Day Negative 30, and Chris Hayes have managed to move the ball forward with interviews and analysis that justify their attention to the story.

But for the most part, on MSNBC and CNN, the spaces between major developments have been filled with the same conversations, the same dueling banjos about Christie’s future, the same interviews with Barbara Buono, and on shows like The Last Word, the same endless dissections of what we already know, and what it all proves about Chris Christie, and the culture of whatever, and the infinite questions this all raises.

All of this time could be better spent developing new reporting on the story, or providing concise updates until something else actually happens. Until then, there’s only one question that really matters in all of this, the answer to which will render arguments about the intensity of the coverage moot. It doesn’t matter what Christie knew, and when he knew it, because most people with any common sense are already pretty sure he knew about the lane closures in advance, and no one anywhere believes that he knew nothing about it until January 8. There will be people who pretend to believe Christie in blog comments, just to start a conversation, but even at this early stage, it is impossible to believe Christie didn’t know about the Bridgenado that his immediate staff was weathering.

The only question now is how well did Chris Christie insulate himself? Is it possible that he never sent a single email or text that could implicate him, or did he wrap himself in the same impenetrable cocoon of personal G-Mail accounts that his staff did, lurking in the shadows like completely-visible Flo in that Progressive commercial? That’s possible, and Christie’s zero-wiggle-room denial might support that possibility. Without a smoking gun like that, Christie will retain a modicum of survivability in this.

Is it possible, then, that Christie only ever talked about the lane closures to people he can trust, absolutely, to carry that knowledge to the grave? If it comes down to Christie’s word against David Wildstein’s, whose lawyer openly shopped for an immunity deal, that’s a messenger Christie’s governorship can probably survive.

But did Governor Christie insulate himself from whatever comes next? His entire governorship is now under a microscope, with dogged and respected reporters at the other end. The kind of arrogance that leads to something like Bridgegate doesn’t lend itself to abundant caution. Instead of pushing all of their chips in now on some ambiguous argument about a “culture” of something, an argument that serves only to validate a weak premise that conservatives like to use, liberals ought to sit back and wait for the rest of the cards to fall. The way things look now, that deck is not stacked in Christie’s favor.