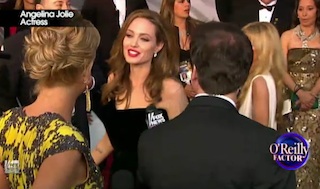 Anyone who was unfortunate enough to suffer through my attempts at a Golden Globe recap (that’ll be the last time the editors ask me to do one of those), knows that I find awards shows kind of repulsive. I’m all for industries rewarding and celebrating their best innovators, but why should we as a nation watch millionaires pat each other on the back for three hours? But I’m torn. I mean, I love movies, so I hate that the Oscars make me dislike everyone involved in them. Fortunately, The O’Reilly Factor was there to help. Last night, the show aired a segment just awful enough to help remind me that movie stars are cool people after all.

You see, at some point in recent years, various Fox News personalities have decided that everyone who lives in Hollywood is a big, stupid, jerky jerkface. This mentality has already led to some of the worst moments on shows like The Five, however, in those cases it’s usually just a couple minutes of Greg Gutfeld making Alec Baldwin jokes. Here we were treated to The Factor‘s resident ambusher Jesse Waters asking excited celebrities about gas prices while repeatedly cutting to a random assortment of completely unrelated movie clips that seems to have been assembled by an ADD-afflicted alien just discovering the human concept of “funny.”

Now, we all know what this segment was supposed to be. Like Waters’ previous montage exposing the awful truth that, hey, some 18 year olds are kind of dumb, the field producer’s plan was obviously to get some footage that he can edit together to make famous liberals look foolish. But the amazing thing is that he couldn’t even do that! Aside for some silly clip of Nick Nolte being Nick Nolte, all the celebrities came off as just regular people trying to go to a party. Was this really the best footage he could get?

And, when George Clooney lost his temper after Waters kept referring to the President as just “Obama,” Bill O’Reilly agreed with him and scolded his own staff member. Waters feebly attempted to argue that he had found an interview quote of Clooney referring to George W. Bush as just “Bush.” I don’t doubt that that quote exists and I don’t want to harp on this, but wouldn’t it have made sense to include it in the actual segment instead of bringing it up later? If you have proof that Clooney’s a hypocrite, show it. Perhaps, you could have cut the 30th “wacky” movie line. I mean, that just kind of seems like Television 101.*

Of course, I suppose some credit should be paid to Waters. After all, it’s pretty darn hard to take pampered, millionaire movie stars and make them look like sympathetic victims.

*UPDATE: I originally misheard Waters and thought he said there was a clip of Clooney saying “Bush” instead of (as a commenter points out) just an interview. My point still stands though. Had he thrown the quote on the screen after Clooney yelled at him, it would have made the actor look dumb. Not doing that is just another example of how poorly conceived this all was.