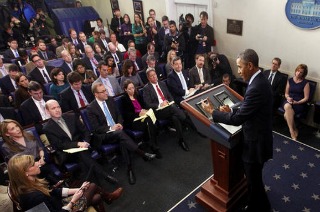 As the one year anniversary of the deadly attack on an American consulate in Benghazi approaches, journalists have begun to take another look into the scandal surrounding the government’s response to that terrorist event. Last week, CNN aired two striking reports revealing that the Central Intelligence Agency had a large number of agents on the ground on the night of the attack and that a suspect in the attack has never been interviewed by investigators. Following these revelatory reports, which some in President Barack Obama’s administration believe represent a political threat, some CNN reporters now fear for their access to the White House. They are not alone.

On July 31, CNN’s The Situation Room broadcast a portion of an interview conducted by reporter Arwa Damon with a suspect in the Benghazi attacks. The suspect revealed to Damon that no investigator has attempted to contact him regarding his involvement in that deadly assault. The following day, CNN’s Drew Griffin broke the news that more than 30 CIA agents were on the ground in Libya on the day of the attack and they are being pressured by the spy agency to not reveal to reporters or congressional investigators what they know of the events of that night. Some CNN reporters are reportedly fearful now that their access to the White House will be hampered following their probing into a story that members of the Obama administration would prefer remain uninvestigated.

“Access is a very serious consideration when it comes to stories that could adversely impact a show, correspondent, or network’s relationship with the administration, a campaign, or any political leader,” one source with insider information told Mediaite.

“I would suggest it’s not an accident that those who have been given a lot of access to the president have generally been AWOL when it comes to stories that might reflect poorly on him,” the source, who did not wish to be identified, continued. “It’s the name of the game. And it’s bad for everyone trying to do this job the right way.” Those reporters have reason to fear for their access to America’s executive branch. Some suspect that reporters who soft-pedal or underreport stories uncomfortable to the administration receive preferential access to White House officials.

On September 12, 2012, less than 24-hours after the attack on the American consulate, President Obama sat down with CBS News reporter Steve Kroft for an in-depth interview on 60 Minutes. A critical portion of that interview, however, was omitted from broadcast only to be released online the Friday before the election. In that unaired portion of the interview, the president appeared to hedge about whether to declare that attack an act of terrorism.

CBS’s decision to hold this portion of the interview became a focus of speculation because, during an explosive presidential debate against Mitt Romney, Obama declared with much more force that he had always regarded the Benghazi attack as a terrorist event.

Some believe it was no coincidence that the president chose 60 Minutes to sit down with outgoing Secretary of State Hillary Clinton for an exit interview in January – one of several that she gave to every network news operation.

Unlike in the exit interviews on the other networks, the 60 Minutes interview’s focus on Benghazi – coming just days after Clinton testified before Congress about her department’s actions leading up to and following the attack – was decidedly limited.

“I want to talk about the hearings this week,” Kroft began.

“You had a very long day. Also, how is your health?” He digressed.

“As the New York Times put it, you accepted responsibility, but not blame,” Kroft asked in a follow up to the above grilling. “Do you feel guilty in any way, in– at a personal level? Do you blame yourself that you didn’t know or that you should have known?”

Both Clinton’s and the president’s response to this question was clinical, lawyerly, and retrospective. Of course, they were able to take this tone because the nature of the question implied that the Benghazi story was a closed book. Today, though, the persistent uncovering of new details relating to the federal response to that attack shows definitively that the Benghazi story is not yet fully understood.

CBS’ 60 Minutes is not the only venue which is protective of their access to the administration. Reporting by ABC News Chief White House Correspondent Jonathan Karl in May surrounding how the administration formed the talking points relating to the terrorist event in Benghazi prompted a flurry of reporting and commentary which suggested that the White House was fending off unwarranted attacks from their political opponents.

Just days prior to Karl’s revelations, NBC News was granted a rare tour of the White House Situation Room as part of a retrospective report reflecting on the two year anniversary of the killing of Osama bin Laden.

In the days that followed Karl’s revelations, NBC News’ most visible personalities were far more hands-off than they had been in the days that initially followed that deadly attack.

“The whole issue of talking point, frankly, throughout this process, has been a sideshow,” Obama pointedly said of Karl’s story unveiling how the talking points were formed. “We dishonor [the fallen] when we, you know, we turn things like this into a political circus.”

Appearing on Nightly News, the NBC News’ Chief White House Correspondent Chuck Todd reacted to Obama’s prickly statement by twice calling the president’s response to those revelations a “defiant” showing. NBC News’ Chief Foreign Affairs Correspondent, Andrea Mitchell, observed that there is no doubt a “political undercurrent” to Republicans questioning Clinton’s culpability in those attacks. “After all, those Republicans are taking direct aim at Clinton, the country’s most popular Democrat and a potential presidential candidate,” she said of the revelations surrounding the talking points on NBC’s Today.

“If you worry about access, you’re in the wrong business,” another insider with detailed information about how journalists and news networks react to reporting about Benghazi told Mediaite. “This shouldn’t be a consideration at all, but it is.”

This source, who also declined to be identified, said that the institution of journalism would be better served if reporters were less protective of their sources within powerful institutions. “If we all raised proper objections, they couldn’t do it to anybody,” the source said of the White House’s efforts to block access to reporters who pursue stories they regard as inconvenient. “We’re really playing the government’s game.”