The Pending Implosion of the ‘Check Your Privilege’ Movement
video

The Pending Implosion of the ‘Check Your Privilege’ Movement 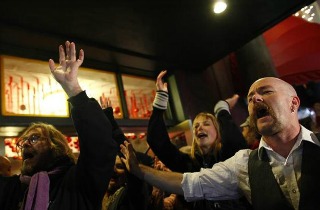 The rapidity with which the “privilege” movement caught on within a small but influential cast of left-leaning opinion bloggers is rivaled only by the alacrity with which the many layers of “privilege” were discovered and subsequently denounced. In an effort to limit those who could claim the moral authority associated with being underprivileged, the movement grew unwieldy and overburdened. Now, the first glancing blow at its logical foundations has threatened to topple the structurally unsound inverted pyramid of the “privilege” movement. It seems set to collapse in on itself.

Your privilege, which you will be reminded to “check” repeatedly by those adherents to the faith, centers on the subjectively defined benefits associated with your gender, age, religion, physical appearance, full use of all or some extremities, height, race, skin tone (not to be confused with race), and sexuality. And that is a truncated list of the ever-expanding catalogue of “privileges” one might wield.

First coined in 1988 by social justice activist Peggy McIntosh, the term has become a religion for a sect of politically correct college students and left-of-center bloggers. But the speed with which the movement caught on and was appropriated by everyone who could articulate a tenuous claim to adversity appears to already have reached the point of implosion. And it was a Princeton University freshman that may be remembered as the person responsible for achieving critical mass.

In a now famous essay in The Princeton Tory, Tal Fortgang expressed his frustration over his accomplishments being diminished by his classmates who attribute them more to his circumstances of birth than his efforts. Fortgang noted that his supposed fortunes of birth also include two Jewish grandparents who escaped Nazi-occupied Poland after enduring a “death march” into Bergen-Belsen. Unlike the privilege-mongers he is surrounded by, his point in defining his background was not to elicit (or demand) sympathy, but to demonstrate that he and his relatives preferred their own ingenuity and personal fortitude to pity.

“It was my privilege that my grandfather was blessed with resolve and an entrepreneurial spirit, and that he was lucky enough to come to the place where he could realize the dream of giving his children a better life than he had,” Fortgang wrote.

Of course, this sentiment – one which strikes at the heart of a noxious worldview upon which careers in thought leadership are built – resulted in a withering series of attacks.

“Some of my best grandparents fled the Nazis,” wrote Mediaite contributor Luke O’Neil in a post rounding up some of the reactions to Fortgang’s confessional. O’Neil and other researchers uncovered Fortgang expressing even more objectionable opinions in which he expressed sympathy for Israeli settlers and antipathy toward Palestinian leadership –- two points of view deemed utterly anathema on America’s campuses beyond the Orwellian-named “free speech zones.”

“I’m not racist, in other words, but my really shitty political opinions are,” O’Neil wrote in summation of what he believes are Fortgang’s views.

MSNBC host Touré also jumped on the bandwagon criticizing Fortgang, noting that those who deny its existence are simply unable to sense it. “White privilege is like air,” Touré stated. But he is incorrect; it’s perfectly possible to observe when there is no air. The existence of a white privilege vacuum is, however, unfalsifiable on MSNBC.

But Touré got to the heart of the matter when he said that the identifying “privilege” is more informative than highlighting the obvious racism of people like Los Angeles Clippers owner Donald Sterling and/or Nevada rancher Cliven Bundy. Their racism is self-evident to even casual observers. “Privilege” requires a professional to both define and identify. The ability to divine “privilege” is a competitive advantage, and the Sterlings and Bundys of the world threaten to reduce the utility of that invented skill.

MSNBC co-host Krystal Ball acknowledged this phenomenon when she noted that Fortgang was wrong to feel insulted when he was told to “check” his privilege. The Princeton University student should, instead, have known that his failure to acknowledge the sins of past generations of Americans to whom he is not even related was actually offensive to others. Indeed, that was his intention.

And these are merely the criticisms of Fortgang’s ideas. You can only imagine what those who have taken aim at his motives are implying.

The backlash to Fortgang’s heresy has been so scathing because his critique of this hollow “weltanschauung” was so wounding. The defenders of “privilege” immediately raised the threat level to DefCon 1. His heresy cannot be allowed to infect the rest of the fold. But it seems as though it already has…

Appearing in The New Republic — that bastion of liberal like-think, of all places — Julia Fisher lamented on Tuesday how the word “privilege” has become a “weapon” rather than a tool for instruction.

“In liberal spheres of debate—spheres that, as a student at an elite college, Fortgang must be familiar with—privilege can be a sort of scarlet letter,” she conceded. “The real problem with the phrase “check your privilege”—aside from the fact that it reduces people to the sum of their characteristics—is that it has become a handicapping device.”

It’s the first cracks in the dam, but don’t expect them to be plugged anytime soon. A philosophy as shallow as “privilege” cannot allow dissent, and Fisher is not in for a constructive conversation with her critics. She, too, must be chided and jettisoned.

The rise and fall of the notion of “privilege” has been rapid. It served as a life raft for those set adrift in a complex world and provided a convincing way to avoid having to navigate the inherent inequities that characterize a free system. If they should fail, their lack of privilege would provide them absolution. But the world is a complex place for many, and the life raft is set to capsize as multitudes scramble over their neighbors to climb aboard.

It could not happen to a more deserving cast of characters.