The (Race) War on Christmas: Megyn Kelly Declares ‘Santa Claus Just Is White’ and So Was Jesus

The (Race) War on Christmas: Megyn Kelly Declares ‘Santa Claus Just Is White’ and So Was Jesus 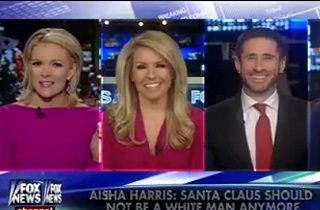 It’s come to this. Of all the absurdity that has emerged from the War on Christmas™ narrative, there has been nothing so surreal as a hard news anchor weighing in, authoritatively, on the racial identity of a nonexistent person, which is what happened on Wednesday night’s edition of The Kelly File. Discussing a Slate article that suggested a more inclusive Santa, host Megyn Kelly repeatedly informed “the kids” that “Santa Claus just is white,” and that “Jesus was a white man, too.”

Slate’s Aisha Harris wrote a thoughtful piece about the effects of cultural exclusion from such a dominant American symbol of childhood, and suggested that Santa Claus be transformed, not into a black man (good thinking, because Black Santa would get down exactly one chimney before getting shot in the face), but a penguin, “spare millions of nonwhite kids the insecurity and shame” that she remembers from childhood.

Of this essay about inclusion, Kelly says: “I kind of laughed and I said this is ridiculous. Yet another person claiming it’s racist to have a white Santa.”

Harris, it should be noted, did not say it was “racist to have a white Santa,” but rather that the notion that Santa can only be white “helps perpetuate the whole ‘white-as-default‘ notion endemic to American culture (and, of course, not just American culture),” i.e. it’s messed up to say that you can’t have a black Santa Claus, as well.

“For kids watching at home, Santa just is white,” Kelly continues, “but this person is arguing we should have a black Santa.”

Again, Harris actually isn’t arguing that at all (not that there would be anything wrong with a black Santa, any more than there’s a problem with an endless succession of white Jackson Fives). She wants him to be a penguin.

Some of the panel handles the subject with a surprising amount of nuance but, later on, Kelly answers their agreement by responding “Just because it makes you feel uncomfortable doesn’t mean it has to change. Jesus was a white man, too. It’s like we have, he’s a historical figure, as is Santa.”

There is, of course, considerable disagreement about Jesus’ race and appearance, but her designation of Santa Claus as a “historical figure” dooms Kelly’s argument.

After Monica Crowley sensibly observes that “a penguin would never work, because penguin cannot lug gifts around the world,” unlike pre-diabetic fat men on flying sleds, she agrees with Kelly that “Santa Claus is based on St. Nicholas, a Greek bishop, who was a white man.”

Kelly’s main objection here seems to be changing Santa because, obviously, there are no differences between these two guys: 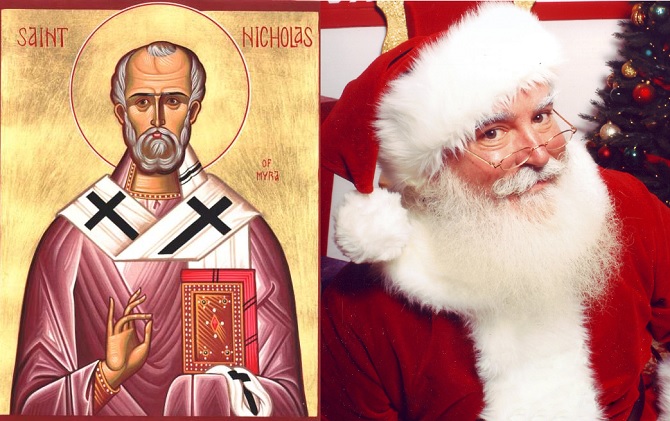 As Crowley points out, Santa is partially based on a historical figure, one with whom the current Santa Claus differs significantly. If we’re going to be purists, then we should be decorating our trees with the pickled, severed heads of would-be sex slaves, and street-corner Santas should be railing against Arianism as they ring their bells. Of the millions of differences that there are between Santa Claus and Saint Nicholas, why is it that the one trait that must never, ever be changed is that he was white (assuming he was even all that white)?

Because it’s just that important, apparently.

We had an expression in my family that went “You keep Christmas in your way, and I’ll keep it in mine,” and it worked pretty well, but if we’re looking to roll out a new, dominant cultural symbol of Christmas, then Santa Claus should be a giant self-aware computer who delivers presents using an army of antlered (possibly red-nosed) drones. Now there’s a War on Christmas I can get behind.

Here’s the clip, from Fox News’ The Kelly File: