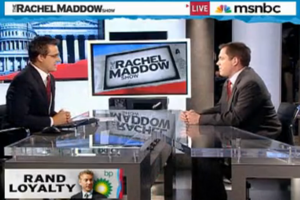 As of last Tuesday, Kentucky Senate candidate Rand Paul has become the national face of libertarianism and dominated the news cycle as such. One problem? The news cycle isn’t quite used to having libertarians all over it, so much of the coverage has been dedicated just to explaining what exactly libertarianism is. Last night on The Rachel Maddow Show, Chris Hayes (filling in for Rachel Maddow) found a real-life libertarian, the Washington Examiner‘s Tim Carney, and brought him in to talk philosophy, and why libertarianism is so incompatible with cable news.

Hayes and Carney dug deep into the free market, limited government ideology that Paul struggled to defend this week when his opposition to some parts of the 1964 Civil Rights Act surfaced, sparking a backlash that led him to even cancel his appearance on Meet the Press this Sunday.

Hayes also asked about the vanishing act libertarianism seems to do once libertarians get elected. As he put it, “you vote for the Rand Paul rhetoric and what you get is Newt Gingrich and Tom DeLay and a lot of crony capitalism, and it seems like such a trend… Why is it going to be different if the Republicans take over this time?” Carney answered that, probably, it won’t be different this time, but that libertarianism continues to be appealing in elections because Democrats end up adopting big government views once elected, too, so the fact that it happens on both sides cushions the blow every time.

On the case of Rand Paul, specifically, and why he has suffered such a backlash based on his strict ideology, Carney argued that part of the problem is that, because libertarianism is not inherently practical, it makes for very bad TV– bad TV we rarely see because even libertarian politicians seem to like the government a lot more when they become part of it:

Libertarianism is more principle-based than, say, progressivism, which looks at ‘What are the problems we need to solve? What are the consequences?’ and sort of drives straight at it. Libertarianism comes from more principles. That will be a difficult philosophy to lay out, especially when you’re asked specific questions in the flash-bang heat of, no offense, but… cable news can’t draw this stuff out as thoroughly as it needs to. But also you’re right that politicians who get elected really don’t adhere to libertarian views, so there aren’t too many people who have to go out and defend these difficult questions of libertarianism.

The entire conversation below: