Rothman: The RNC’s Boycott of MSNBC is Brilliant

Rothman: The RNC’s Boycott of MSNBC is Brilliant 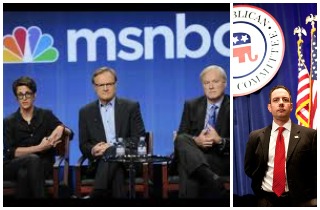 To paraphrase the great Commissioner James Gordon, MSNBC is not the villain the Republican National Committee deserves, but it’s the one they need right now.

Yes, RNC Chairman Reince Priebus‘s strongly-worded memo to Republican elected officials and committee staffers banning them from appearing on a cable news network — which has made a virtue of antagonizing not merely GOP policymakers but the party’s rank and file voters — is a publicity stunt. It is also rather brilliant politics.

On issues ranging from abortion policy, to the expanding federal debt, to reforming the nation’s health care system, polls consistently show that the Republican position is more in line with public sentiment than the Democratic position. And yet, surveys also consistently show that the public, by broad margins cutting across all demographics, views the GOP as rigid, uncompromising, and “extreme.”

This is a failure of messaging, not policy. The Republican National Committee and those politicians who call the GOP home have been woefully inept at framing theirs as the position favored by majorities. In spite of the fact that the liberal position is more often the “extreme” position, Republicans have been unable to convincingly communicate this fact to the public.

With Republicans unable to create a foil out of their Democratic counterparts, the GOP could benefit by framing MSNBC’s aggressively liberal hosts and commentators as the opposition. As a political strategy, this one is of only temporary benefit and risks greatly diminishing returns if it becomes a lasting policy; MSNBC will never be on the ballot. That said, shedding the “extremist” label must be a goal for the party ahead of 2016, and positioning the GOP in opposition to MSNBC is a good place to start.

Why MSNBC makes an effective foil for the GOP is self-evident. The network or its hosts have had to issue no less than 19 apologies in the last two years for inaccurate or misleading reports or for engaging in conduct unbecoming of a representative of the network. In most cases, these apologies are issued only after the public outcry has grown deafening. Far more often, the network’s hosts are allowed to conduct themselves in ways that other networks personalities are not. The bar has been lowered to a degree that the public and the country’s media watchdogs simply expect more of MSNBC’s competitors.

With the first MSNBC apology of 2014 coming less than a month into the new year, the RNC is puffing up its chest, throwing down the gauntlet, and declaring that they have had enough. Priebus has demanded an apology from MSNBC President Phil Griffin, and for more than just one offending tweet. Until such time, the network’s hosts can carry on talking about Republicans in uncivil terms without their participation.

This strategy has its detractors. Talk show host and former Rep. Joe Walsh (R-IL) railed against this tactic as a self-defeating one. He lamented that it sequesters Republicans into ideological camps. The Daily Caller’s Matt Lewis wrote that the RNC should make a fight against MSNBC about the average Americans who vote GOP rather than the party’s central committee. He argues that the party is better served by elevating the biracial and multiracial conservative families that take offense to the repeated implication –- or, in many cases, the direct and unguarded assertion — that conservatives harbor racial antipathy.

They’re both correct in a way, but their concerns are too focused on this news cycle and not the next. Walsh is dead right to object to a call from some conservatives for a boycott of MSNBC’s advertisers –- this is a repeatedly failed strategy and those who call for boycotts look impotent when they inevitably fail. But airing “grievances” on that network makes for good television and does not expand the GOP’s brand. It merely aids in the creation and promotion of theirs. Lewis’ concern is equally valid, but his recommendation, that the GOP make this gripe about the injustice done to Republican voters rather than the Republican Party, is perfectly complimentary with this (likely temporary) narrow and circumspect boycott of MSNBC.

The RNC can bristle with offense over the treatment of its voters by this cable network, one that has become virtually indistinguishable from its widely-watched parent network, NBC News, and do so in the name of those wronged conservative mixed-race families. These are not mutually exclusive strategies.

Priebus and the Republican National Committee are playing hardball. They are doing so against a soft target, but they have to start somewhere. The party has been unfairly branded as radical and intemperate, and waiting for this unjust characterization to self-correct is a losing game. The GOP will be well-served, for the time being, by showing just who the extremists really are.

UPDATE: MSNBC President Phil Griffin has apologized to the RNC and to multiracial families everywhere. In a statement, Griffin also announced that the unnamed staffer responsible for this latest offense has been let go. Their demands having been met, the RNC’s boycott will, presumably, now end. The GOP has been short on victories for some time. Even though this is a small one with limited implications, a win is a win. All in all, smart politics.