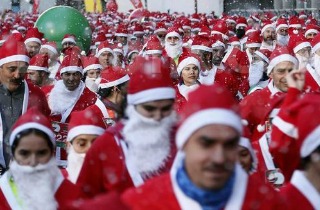 Insert the average American, one who has not traveled extensively, into East Africa and ask him or her to identify the distinctions between, say, a Tutsi and Twa tribesman and a Hutu. One suspects that our displaced American would be vexed by this challenge. But for the tribespeople under scrutiny, for whom these differences are not only self-evident but of paramount importance, this American’s confusion is likely to offend their sensibilities mightily.

This tribalism is a universal human trait -– a feature so constant throughout human history that it likely has its origins in mankind’s evolutionary past. The more alike a people become, the more they see only their mutual dissimilarities.

This phenomenon is evident in the profoundly asinine debate raging in cable news over the last week centered on determining once and for all the race of the mythical Christmas figure, Santa Claus. Nearly a week ago, Fox anchor Megyn Kelly asserted, while addressing a column on the subject from a left-leaning Slate columnist, that “Santa just is white.” With that, the predictable carnival act had begun.

A broad swath of political commentators across the ideological spectrum weighed in with their thoughts on the boiling controversy of Santa’s race. Commentators ranging from Touré to Bill O’Reilly to Melissa Harris-Perry to Jon Stewart to Bill O’Reilly have all jumped into the fray with observations on the racial background of an imaginary figure of childhood wonderment.

The inanity of this particular subject has not stopped the commentary class from joining this latest racial debate with a familiar fury. It is the same ferocity that has been brought to every nausea-inducing attack and counterattack on the supposed racial disparities that plague the nation.

There is, however, one redemptive quality to the debate over the amount of melanin in Santa’s epidermis: As race relations in the United States improve, as they have been year-over-year, the more we sweat the small stuff.

Sadly, this contention — supported by both data and events — is more likely to draw frothing outrage than ovations. Hundreds of careers and many thousands more identities are moored on the increasingly shaky foundation of racial disharmony. But the trend of positive progress is evident even in the nature of the topics which grip the political commentariat’s attention which supposedly expose the country’s hideous racist underbelly.

The same generation of men and women who walked across the Edmund Pettus Bridge into a maelstrom, as well as those who greeted those righteous protesters with fire hoses and police batons, are alive today to witness cable newsers wildly inflate the racial significance of even minor events.

Commentators on the left even obsess over the racial tropes displayed in commentary about President Obama’s “selfie” with world leaders and the racist origins of the term “Obamacare” while cultural observers on the right stoke fears about the “horrifying and deadly new trend” of roaming bands of black teenagers assaulting passersby.

Even issues of indisputable significance, like voting rights, are done a disservice by the hyperbole employed by those who seek to augment the gravity of the subject. State-level initiatives curtailing weekend voting hours or imposing identification requirements on prospective voters are routinely portrayed as the resurrection of Jim Crow. Such an assertion would confound the African-Americans who, not long ago, were physically barred from voting, just as it would confuse the forthrightly racist poll watchers who were prepared to shed blood in order to bar blacks from the ballot box.

Posterity will not record these as the great racial issues of our time. No, the grand tide of history will record how the first decades of the 21st Century saw the nation twice electing a black president, the demand for new civil rights legislation sinking to all-time lows, and African-Americans become more likely than any other demographic to have been accepted to and completed some college.

Amid such progress, Americans are left to litigate the race of Santa Claus. In a way, this foolish debate is a welcome sign that our imperfect nation is making strides in its perennial quest to create an egalitarian society. Racism is not gone -– this foul feature of life will probably always be with us to some degree — but things are getting better.

Increasing equality has been met with a general heightened perceptual sensitivity to both the real and exaggerated vestiges of inequality. Given a bit of historical perspective, this is objectively a good problem to have.