From Bob Dole to Krugman: The Shame of Those Who Ignored VA’s Issues to Score Political Points

From Bob Dole to Krugman: The Shame of Those Who Ignored VA’s Issues to Score Political Points 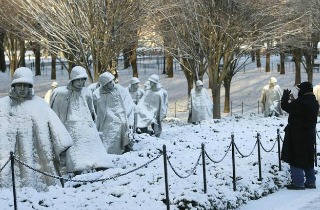 The scandal plaguing the Department of Veterans Affairs is claiming more than the health and even the lives of those to whom America owes the most. It is also taking a toll on the credibility of a number of supposedly dispassionate political professionals who have been offering the VA unwarranted praise for years.

While most of the VA’s unearned plaudits came from progressive ideologues, some Republicans have also called the VA system a model for health care reform. Writing in Politico in 2011, Senate Majority Leader Bob Dole (R-KS) advised the administration “to study the health care delivery system of the Department of Veterans Affairs.” More:

VA is now considered 10 years to 15 years ahead of the private health care system when it comes to technology. Its success has largely been because of its commitment to innovation. This model for government action is possible because of its unique purpose, as well as its successful public-private collaboration. These efficiencies are significant for patients and taxpayers.

Dole is, however, an exception proving the rule. As the Washington Free Beacon’s Andrew Stiles noted on Thursday, prominent liberal thinkers have for years dominated the chorus of those singing the VA’s praises.

In 2006, New York Times columnist Paul Krugman called the VA’s ability to contain costs and provide “excellent care” a “helpful corrective to anti-government ideology.” He echoed this assertion in 2011 in a column castigating Republicans for failing to embrace the VA’s version of “socialized medicine” which, broadly applied, could “solve the troubles of U.S. health care.”

Stiles also observed that America’s explainer-in-chief, Vox.com founder Ezra Klein, who said extending the VA system to non-veterans was among his “favorite ideas” in 2009.

But these prominent voices on the left were merely picking up on a old progressive theme: that the VA provided policy makers with a model of American-style socialized medicine.

Current MSNBC.com reporter and former Slate blogger Timothy Noah invented a brand new word in 2005 to describe those who denied that the VA provided Americans with the best health care around: “flakt”. Why he didn’t simply appropriate “deniers” for this cause, as is vogue today, none can say.

“Socialized medicine has been tried in the United States, and it has proven superior to health care supplied by the private sector,” he wrote. “What’s really needed is to make private hospitals more like VA hospitals.”

“Over the past decade, the VA has transformed itself from a lumbering, poorly performing bureaucracy to an efficient provider of relatively high-quality medical services,” an unsigned 2007 piece in the New York Times read. “The VA has used remarkably innovative means to improve its quality of care and control costs; some of its systems could serve as blueprints for national healthcare reform.”

“Veterans Health Administration provides veterans with benefits that are the envy of the rest of the health care system,” Think Progress’s Igor Volsky wrote in October 2013.

Even those organizations which claim to be neutral, like the self-appointed arbiter of truths, Politifact, have egg on their faces today.

Not long ago, as Philip Kerpen highlighted, restructuring the VA to make it a “national leader in health reform” was one of President Barack Obama‘s great achievements: 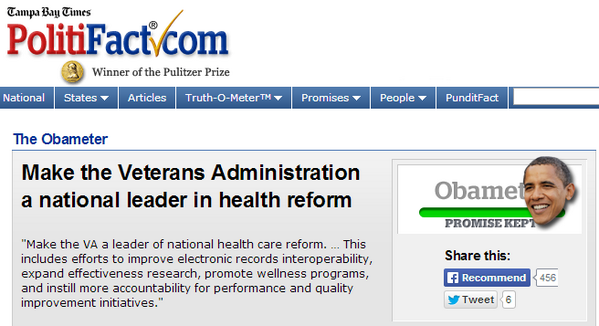 Oops. Looks like Politifact has had to revisit that verdict:

One supposes that once a promise is “kept” it cannot be un-kept. But that sort of intellectual rigidity is far too limiting when the goal is to advance a cause.

Today, we know the VA is anything but a model for health care reform, but this is not a new revelation. Obama truly did inherit a miserably defective VA system, but it was one he campaigned on changing. Now, more than five years into his presidency, that VA’s cascading failures have grown too grotesque to ignore.

We know that, not only were veterans receiving substandard care, but a system-wide initiative to hide the VA’s failures from those responsible for the administration’s oversight. That’s not merely negligence; it’s malfeasance and the cruelest form of corruption.

Given the gravity of the problem and the urgency of the need to provide medical care for veterans, even progressive lawmakers like Rep. Sheila Jackson Lee (D-TX) are conceding the need for an emergency infusion of what the administration once conceded was standard “private sector velocity.”

That’s good advice. Maybe those self-appointed policy wonks who have been ignoring the VA’s problems for years will have the courtesy of putting their ideological obsession with socialized medicine on the back burner for a few days in order to allow America’s veterans to get the care they need.