The Simpsons Take On Fox News And Glenn Beck 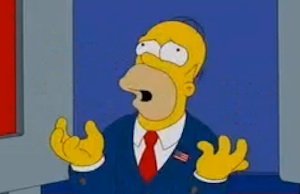 On tonight’s episode of the The Simpsons, the writers took no prisoners in a brilliant excoriation of the cable news industrial complex, with Homer Simpson hosting a Fox News-esque political opinion show Gut Check and tweaking Glenn Beck‘s over-the-top persona in the process.

The premise of the episode is that Homer has become a viral internet video sensation after Bart uploads footage of him having an Alec Baldwin-esque airplane meltdown.

RELATED: The Simpsons Takes Swipe At Fox News: ‘Not Racist But #1 With Racists’

His YouTube stardom earns him a spot as a commentator on cable news show HeadButt, with commentary from Adriatica Veljohnson (a not-too-subtle jab at Arianna Huffington). Homer goes off script, and claims to speak for “those real people out there who buy their coffee from the mini-mart and grab enough sugar packs for a week. Honest, hardworking, sugar-stealing Americans!”

Cable news executives are so endeared by Homer’s folksiness — saying he is the “ill-informed gas bag that networks cannot get enough of” — that they decide to give him his own show, Gut Check!

“I’m not just another loudmouth!” Homer exclaims on his program. “I’m a loudmouth who says things you’re afraid to say, but not racist things!”

In a spot-on, cheeky parody of Beck, Homer ostentatiously sobs crocodile tears as he laments a high school in Nebraska replacing football with soccer as a team sport.

Watching Homer’s show from Moe’s Tavern, Carl wonders if it’s a little weird how much he cries. “No way!” contends Lenny. “When a guy who loves America cries, it makes him super straight!”

The Simpsons‘ writers have outdone themselves tonight, with this no-holds-barred parody of the over-the-top bloviating shenanigans of some cable news personalities.