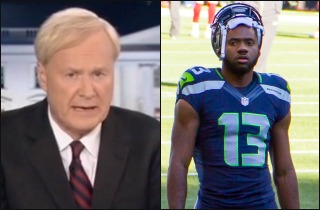 One of these Chris Matthewses is not like the other.

As you may already be well aware, one of the Seattle Seahawks’ wide receivers is named Chris Matthews. Now, we’re not conspiracy theorists here, but check this out: The Super Bowl aired on NBC, the network that owns MSNBC, which employs MSNBC’s Hardball host Chris Matthews. Whoa.

But in all seriousness, Sunday evening’s color commentators made much ado about the fact that an immensely talented NFL receiver shares a name with the guy who gives spittle-flecked rants about politics on a nightly basis.

Let’s just say the NFL’s Matthews is really good. And not difficult to watch:

Finally, a Chris Matthews we can look up to.

As both NBC broadcasters noted, Seahawks offensive coordinator Darrell Bevell gave his player Matthews the nickname “Hardball,” while the athlete himself has joked that he can’t search his name in Wikipedia without ending up on the MSNBC host’s page. And then later in the game, when Matthews made a series of spectacular catches towards the end of the first half, the broadcast booth got a little clever, airing a montage of his receptions with the title “Hardball with Chris Matthews.”

Watch both of those below, via NBC/NFL:


Of course, the cleverness didn’t stop there. At the end of the first half, MSNBC’s Chris Matthews decided he’d descend from his near-septuagenarian pedestal and do some social media Twittering about the coincidental naming:

Congratulations on a great first half to the @Seahawks Chris Matthews from the @hardball Chris Matthews! #sb49 #SuperBowl #hardball

It got re-tweeted a bunch (1,300 times and counting), but it didn’t exactly impress others:

We'll never hear the end of that quip about Chris Matthews from @hardball_chris on @hardball tomorrow.
#SuperBowlXLIX

I'm begging you to shut up. RT @msnbc: What a game! #HardballWithChrisMatthews pic.twitter.com/q5pn3KQTxG

But this is the closest the MSNBC host will ever come to being culturally relevant outside the Acela Corridor, so cut him some slack.