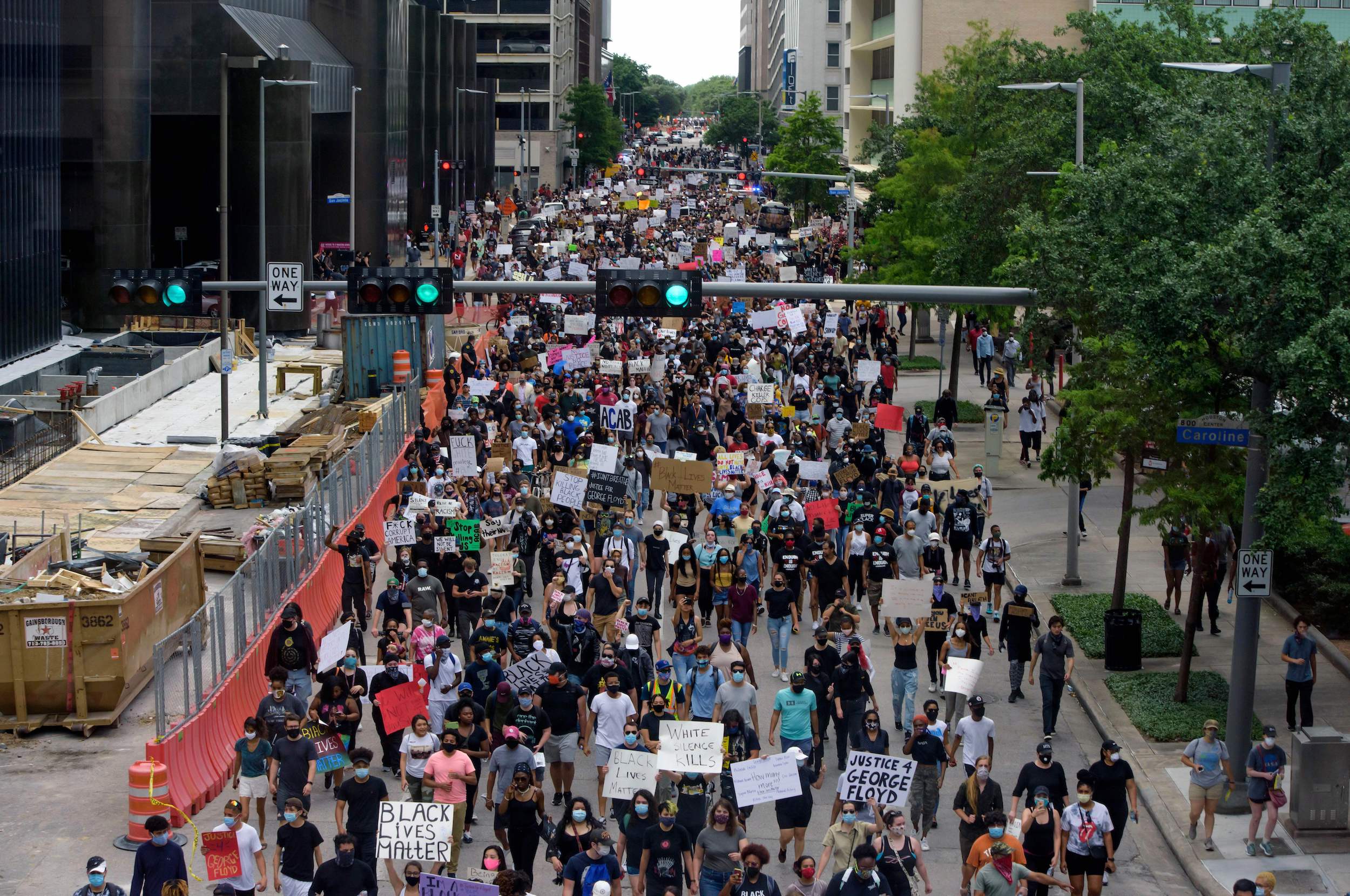 Garrett Haake knew he had to turn around when he saw the burning car. The MSNBC reporter was live during protests in Washington D.C. and thought maybe if his crew cut diagonally on the intersection of 16th Street between protesters and police quickly they could be safe. “Clearly, things had gone off the rails,” Haake said.

A few seconds later, Haake cursed on TV. First he was grazed by a rubber bullet. Then another hit him in the lower back, leaving a “whole rainbow shade” of bruising. It hurt, Haake admitted, but didn’t incapacitate him. So he kept moving forward.

Most reporters on the frontlines of protests have similar stories. You’ve seen the videos of them getting shot at. Images of their broken cameras. Broken bones. That’s just when the cameras are rolling.

Our extensive report on how cable news is adapting to the pandemic and protests took a look at how reporters cover those stories. Here, we’re taking an in-depth look at what it is they’re covering.

For them, weeks of large crowds meant a lot of unexpected roadblocks. Dispatched around America, cable news correspondents were expected to be the eyes and ears of nationwide protests following the killing of George Floyd. Most accomplished that. Some have battle wounds to show for it. Others even became part of the story.

“The temperature is hot,” Fox News correspondent Bryan Llenas said. “And I think we all need to realize the media needs to keep contributing to the dialogue of what’s happening on the streets.”

Protests began in Minneapolis on May 26 after a eight minute and 46 second video showed police officer Derek Chauvin kneeling on George Floyd’s neck, ending in his death. Around the nation, people took to the streets to demand charges against the officers — and protest more broadly against police brutality. Since, Chauvin was charged with second-degree murder, and several cities, including Minneapolis and Los Angeles, have taken some action to reduce police budgets.

Covering large-scale protests isn’t new to the seasoned veterans in cable news. Comparisons sparked between these protests and Baltimore’s scene after the death of Freddie Gray or the days of chaos in Ferguson, Missouri almost six years ago. CNN’s Sara Sidner covered Ferguson in 2016, but at times struggled to walk away from the story this time.

“I usually don’t deal well with my emotional issues [during protests],” Sidner said. 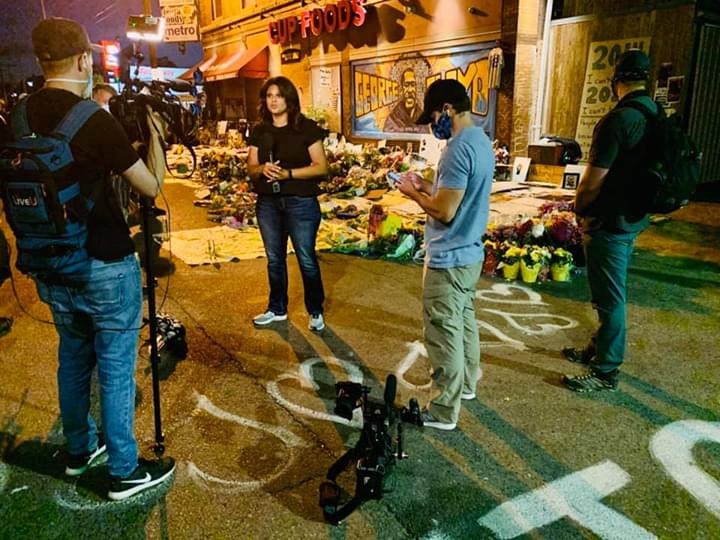 Sara Sidner doing a live shot in front of the memorial where George Floyd was killed (Courtesy of CNN).

Sidner was part of CNN’s team in Minneapolis, the city that sparked the nation’s first major protests following Floyd’s death. At times, Sidner struggled to sleep. “Some of it was self-sabotage,” she joked.

Tasked with late night coverage, her days would start with morning phone calls to longtime Minneapolis residents and activists. For those weeks in May and early June, she’d work 16-hour days at times because the news cycle was moving so fast.

One morning, Sidner awoke to a text asking if she needed help following a night of coverage that went until 3 a.m. “Are you OK?” the message read. “Do you need a lawyer?” She was confused, so she scrolled through her phone. Her colleague, Omar Jimenez, was arrested the morning of May 29 and somebody had mistaken the CNN reporter in police custody as Sidner.

“It was just torture to watch,” she said.

As marches ensued in the morning and buildings burned at night in Minneapolis, protests stretched to the East Coast. Llenas transitioned from Covid-19 coverage in New York City to live shots behind packed crowds. His team, which included two security guards, advanced throughout the city’s five boroughs, making “thousands” of split-second decisions on where they should go next. Llenas made several appearances on prime time Fox News shows.

“There is so much pressure on us to get it right, especially for this moment,” Llenas said. “Particularly who I am, what I look like, and who I work for.”

Llenas would work between 4:30 p.m. and 4:30 a.m. Some nights, he would stay up until 8 a.m. going over the events of the night in his head pondering if he and his crew “got it right.”

On a Saturday night following a shift that ended close to sunrise, Llenas realized he still had the same clothes on from Friday morning. “You look back and you try to play Monday morning quarterback and hope you did a good job, but it’s almost an impossible situation that you’re in,” he said. 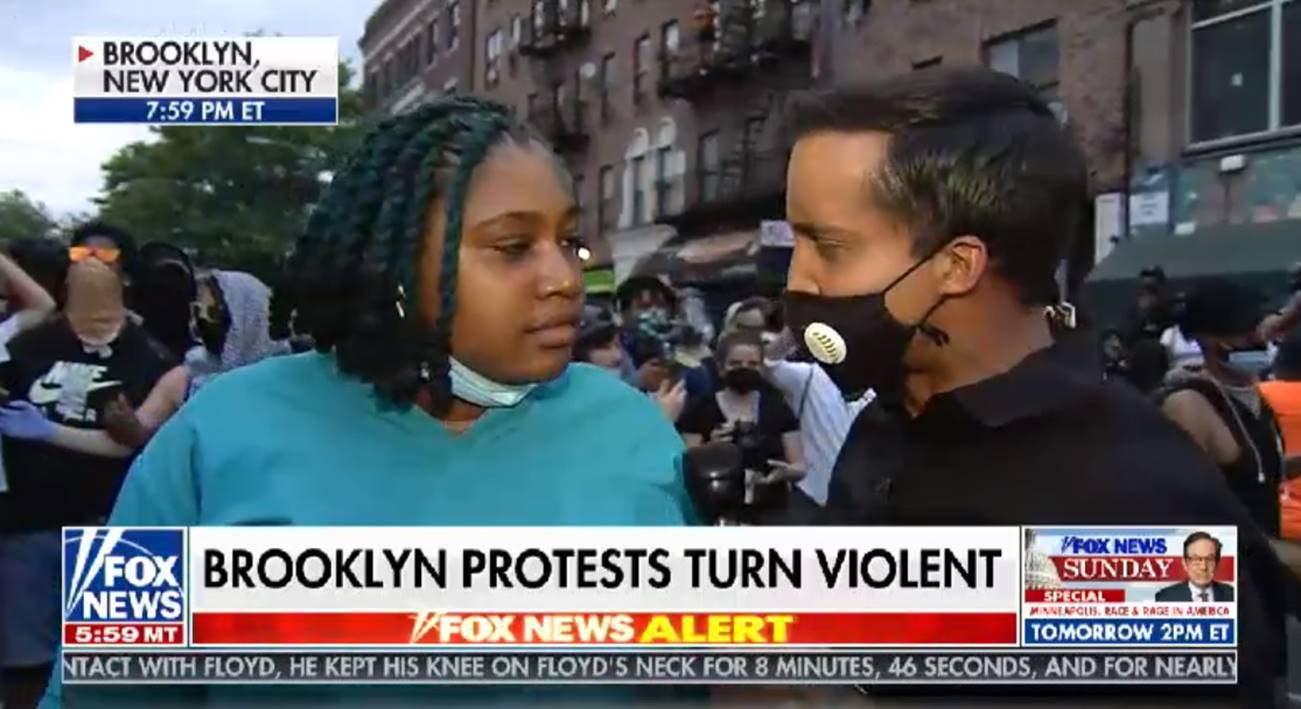 Fox’s Bryan Llenas interviews a nurse during protests in Brooklyn.

There were times he saw fire extinguishers and bricks thrown into glass. But for the most part, Llenas wanted to avoid making vandalism and theft the only focus of the story.

When the protests turned violent and police officers sprayed tear gas, reporters were shown on TV wielding shields and heavy masks. MSNBC’s Jo Ling Kent, who was hit with what she thinks was a flashbang grenade or a tear gas canister on live TV in Seattle, will wear a gas mask, goggles, and a helmet if it’s necessary.

“I love to be up close and personal on a story but when you’re putting on a gas mask, it does create a new barrier,” Kent said. “It’s a challenge, but I feel really fortunate that we had them because we ended up in a situation where there was tear gas deployed.”

As days went by, national attention shifted toward Washington D.C., where demonstrators assembled outside the White House and protested President Donald Trump. The last weekend of May featured the most intense moments of protest in the nation’s capital, said reporters at the scene. On one night, a medical helicopter flew low toward a group of protesters.

“We thought it was sort of a crowd dispersal move,” Fox’s Kevin Corke said. “To be honest, it was pretty wild. That was definitely a moment that you’ll never forget because it was pretty low, made it very, very windy, almost like you’re being sandblasted with all the dust.”

That Monday, Haake recalled protests in D.C. had cooled down from the weekend. “This rage had been expressed on Sunday night was absent on Monday,” he said. But as the night went on, officers got closer and closer to the crowds. Trump was expected to speak on the Rose Garden around 6:30 p.m. EST. that evening and Haake had a feeling something was going to happen.

He quickly got on the phone with MSNBC’s control room. Officers got so close to him and other protesters that at one point Haake said he could reach out and touch their shoulders. Then, law enforcement pushed forward and started spraying tear gas at protesters minutes before Trump’s address. Haake, who still had bruises from his rubber bullets, went live in the scene. 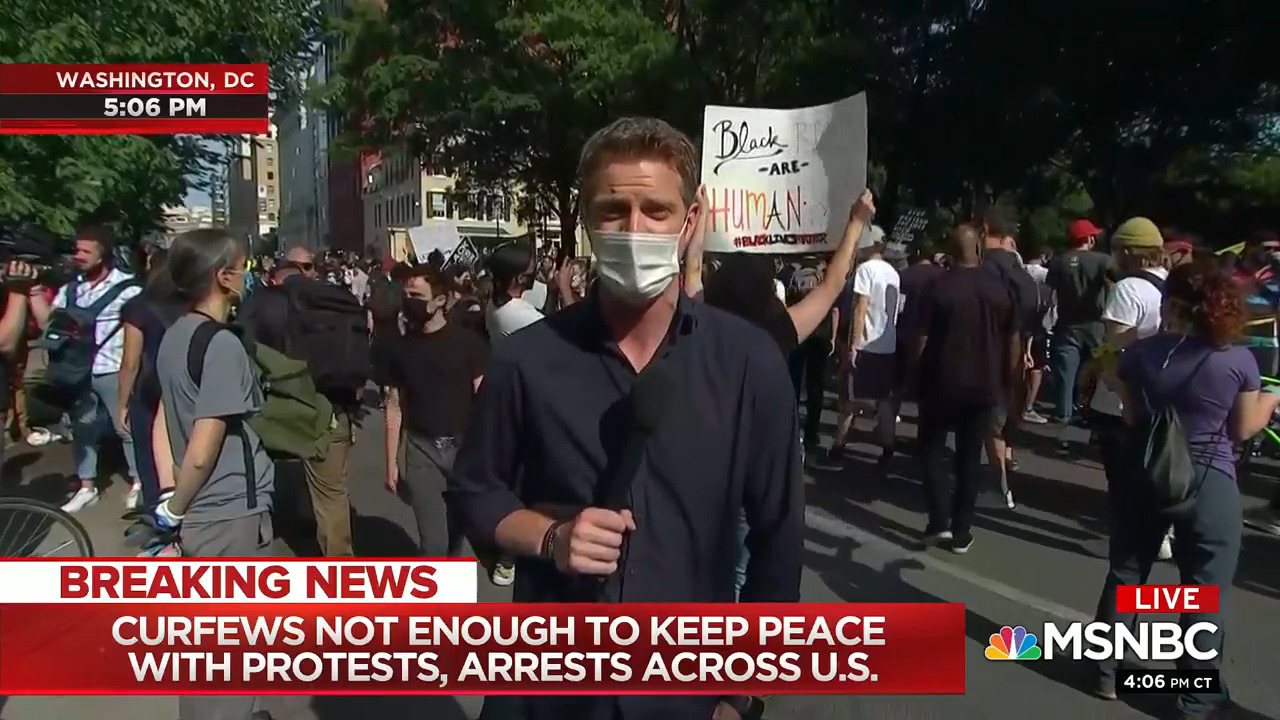 MSNBC’s Garrett Haake reporting during a protest in Washington D.C.

Corke, who covered the same protest, recalled hearing a pellet hit a nearby wall while he shot a stand-up. At first, he kept going, but then started to think it through.

“Another one hit and a third went right by my shoulder so close that I flinched because I could see it out of the corner of my eye,” said Corke. “I said to my photographer, ‘I am not going to get shot shooting a stand-up.'”

Like Llenas, Corke had security detail with him. Late one night in D.C., Corke heard five people start yelling toward him.

He’d seen some of them earlier dragging bats and breaking windows, he said. At times, Corke would back up to keep his distance. He realized maybe they were following him. Corke “wasn’t worried” then, but said “you could definitely hear the bat dragging and they’re kind of following us.” Their security told his team to fall back. Eventually, a couple turns on a couple different streets got them out of the situation.

“It’s one thing to see it play out on television — that’s something else altogether,” Corke said. “To be around it, to see it, you really wish for more calm for your city.”