The Ten Worst Media Disasters of 2010 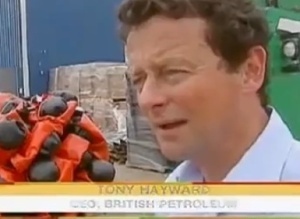 The Mr. Media Training Blog is pleased to announce the 10 worst media disasters of 2010! This year’s winners include a politician threatening to kill a reporter, a movie star threatening to kill his ex-girlfriend, a Prime Minister killing his own political career, and a CEO trying to “top kill” an oil spill.

10. Sarah Palin Scribbles on Her Hand
If you’re a 9-year-old giving a speech to your fourth grade class, it might be adorable to write a few reminders on your hand. If you’re a former Vice Presidential nominee getting paid $100,000 for a high-profile speech, well, not so much. In February, Ms. Palin reinforced the narrative about her lack of heft when she addressed the National Tea Party movement with these words written on her hand: “Energy,” “Tax Cuts,” and “Lift American Spirits.”

9. Christine O’Donnell Disowns Her Wiccan Past
If your campaign needs to put out an ad denying that you’re a witch, you’re probably going to lose.
Delaware GOP Senate candidate Christine O’Donnell should have known not to use the language of denial. It didn’t work well for Richard Nixon (“I am not a crook”), Bill Clinton (“I did not have sexual relations with that woman”), or Larry Craig (“I am not gay”), and it sure didn’t work for her.

8. Dr. Steven Duckett, Former CEO, Alberta Health Services
In November, Alberta’s hospitals had run out of beds, and the public was upset about long emergency room wait times. If you were Dr. Stephen Duckett, CEO of the Alberta government agency responsible for the health of more than 3.5 million Canadians, you probably wanted to express your unwavering commitment to improving the health care system for all Albertans.
He didn’t. Instead, he prioritized a baked good. And he got fired for this interview.

7. Vice President Joe Biden’s Big ‘Effin Deal
It took almost a century for an American president to pass sweeping health care reform legislation. In March, President Obama achieved what past presidents couldn’t. And his signing ceremony represented an opportunity to bask in his achievement.
Instead, Vice President Joe Biden leaned in – near a hot microphone – and told the President the passage was a “big fucking deal.” Biden’s comments earned front page coverage, tainting coverage of the actual legislative accomplishment. And the Vice President reinforced the narrative about his lack of discipline.

>>>>NEXT Up: An Spaced-out Arizona Governor and unhinged NY Gubernatorial candidate!<<<<