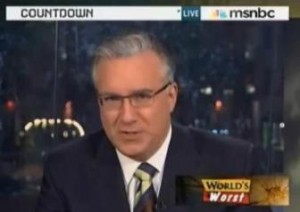 Keith Olbermann was suspended from MSNBC today for an indefinite amount of time, after his bosses found out he donated to three Democratic candidates last week without notifying them first.

That’s the cause and effect. But there are two underlying reasons why this happened today – and why it likely never would have happened two years ago.

Two years ago Keith Olbermann was MSNBC. In many ways, he was untouchable, and knew it. In a New Yorker profile in June 2008, he joked that his boss, Phil Griffin, “thinks he’s my boss.” Around the same time, a high level MSNBC source told me, “He is not central to MSNBC, he is the center of the MSNBC ratings strategy. We hang the entire schedule on him.”

But that’s changed. Now, Rachel Maddow is getting better ratings than Olbermann in the key A25-54 demographic, and Lawrence O’Donnell isn’t far behind. Olbermann is no longer the center of the strategy either – as the network has unveiled a vibrant, massive new campaign “Lean Forward” which focuses on half a dozen members of the MSNBC talent pool.

MSNBC executives – and executives even higher up the ladder – have to feel secure in their position in the cable news battle, even if Olbermann never returns to the line-up. Which brings us to reason number two: Comcast. The imminent merger and ultimate takeover is a tricky business maneuver, that both GE and Comcast have to be aware of. It has the attention of the government, and it has the attention of the competition. The company doesn’t need bad press right now – especially not one that’s political in nature. It also doesn’t help when Olbermann has previously tweeted things like Comcast wanting “to go more liberal” (a claim that doesn’t seem to be backed up anywhere). And on top of all that, this comes as NBC News appears to want to distance themselves from their more partisan cable channel.

If Olbermann sits out his suspension, however long, and is offered the chance to return, he will come back with the understanding his workplace environment is vastly different than it was two years ago, when he was both head coach and superstar. He’s still a powerful force at the network – and continues to get their best total viewer ratings. But he’s no longer as essential as he once was. Will he be capable of dealing with the new conditions and biting the bullet? His past would indicate the answer is no.