The Vetting of Hillary Already Labeled ‘Sexist’ in the Media
video

The Vetting of Hillary Already Labeled ‘Sexist’ in the Media 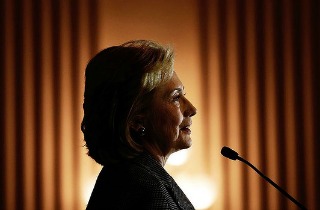 It was bound to happen sooner rather than later. MSNBC host Mika Brzezinski issued on Monday what might be the most full-throated attack on Hillary Clinton’s opponents yet over what she considered their appeals to misogyny and sexism.

Sen. Rand Paul (R-KY) recently embarked on a campaign designed to make Democrats think twice about labeling Republican opposition to late-term abortions and contraception coverage mandates as offensives in the “War on Women.” Paul noted that the party attacking the GOP also lionizes a man who engaged in sexual activity with a subordinate in the workplace. The mere mention of this incontrovertible fact has worked Clinton’s supporters up into a fury.

“Any Republican who is dredging this up is a misogynistic sexist hypocrite,” Brzezinski declared, “because if Bill Clinton can win again with all of these problems, and Hillary Clinton, they can bring down because of this, and they think they can each go after it, they are clueless, and they are complete sexists because it’s not even her affair.” [Watch below, post continues after]

No one said it was, but the new rules being applied to the vetting of a potential presidential candidate and his/her spouse is instructive. One imagines Ann Romney would have appreciated Brzezinski coming to her defense when she was mocked for riding a horse as a therapeutic regimen to alleviate symptoms associated with her multiple sclerosis. That segment is nowhere to be found, but Brzezinski and her co-host did enjoy a good laugh at Mrs. Romney’s expense on occasion, once while repeatedly alluding to her husband’s phallus.

But back to Republicans and their overt sexism.

Brzezinski is not the first to attempt to brand the final years of the Clinton presidency off-limits. In a staggering CNN segment last week, anchor Michaela Pereira dismissed the talk of Clinton’s reaction to the Lewinsky affair as both old news and suspiciously prejudiced.

“Some would argue, it takes two to tango,” she said when discussing Paul’s charge that Bill Clinton used his power to take advantage of an intern in the workplace. “There is a reason we do not have ‘take your spouse to work day’ in America,’” Newsday columnist Ellis Henican agreed.

The Clinton presidency is not the only part of Hillary Clinton’s past deemed unsuitable for public discourse. In January, news broke that Clinton’s 2008 campaign maintained an “enemies list” of former allies who had betrayed her and backed Obama for the nomination. Even the mere mention of this story was deemed sexist.

“There’s a gender element here,” said University of Texas professor Victoria DeFrancesco Soto. “If a guy has a list of people he’s not too keen on, no big deal, but if a woman does, then that is a big deal and it becomes juicy.”

To discuss Clinton like she was any other politician, and not just a female politician, is now defined as sexist. DeFrancesco Soto’s critique would be poignant if she could point to an instance where a male politician maintaining an “enemies list” was dismissed as commonplace. But exacting political retribution against ideological opponents has never been shrugged off as just something boys are wont to do.

Even TIME magazine found itself caught in the crosshairs of such identity politics. The self-appointed few took aim at the magazine for its January cover story, which asked, “Can Anyone Stop Hillary?” The article itself wasn’t the main offender; it was the concept established by the cover photo: 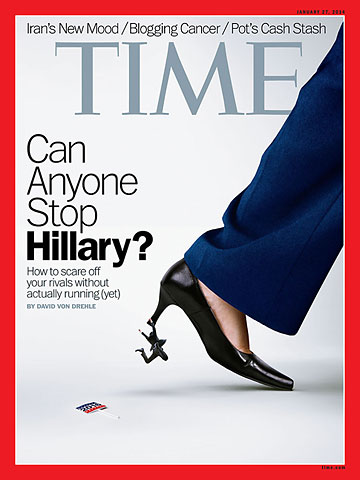 “The image, which played on old stereotypes reducing women to shoes and clothes, elicited some outrage but also much collective eye-rolling, because it felt like a throwback to another era,” wrote author Jessica Valenti in The Washington Post, quoting various feminists attacking the magazine:

Slate’s Amanda Hess called it “sexist and hacky”; the Huffington Post and Marie Claire also denounced it. Mommy blogs got mad, too. “Why, when we’re talking about a professional, powerful woman,” Maria Guido asked on Mommyish.com, “do we oftentimes default to an image of her trampling over men to get to the top? . . . Women read your magazine, you realize this, right?”

While the cover’s theme may not immediately register as inappropriate with laymen, or even TIME’s editors, they scream prejudice to society’s properly educated decoders.

New York Times magazine faced a similar fate when, days later, it released a cover with Clinton’s face superimposed on a planet. That imagery, used to define the many political power players in “orbit” around Clinton, was equally sexist, according to the cultural arbiters.

“This makes me crazy,” said MSNBC host and Clinton ally Andrea Mitchell. “When have you ever seen a magazine cover about a male political figure, international figure, potential candidate, that looks like that?”

Those insisting such stories involving Clinton would be treated differently if the subject were a man should be required to marshal some evidence in support of this claim. Instead, credulous reporters nod sagely at the mere invocation of gender disparities. But, as recent history has taught Democrats, legitimate criticism can be discredited if the critic is branded with a scarlet “-ism.” This is all very familiar.