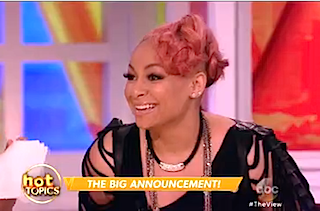 Following the abrupt departure of Rosie O’Donnell (again) from The View earlier this year, the show has been down to just three permanent co-hosts in Whoopi Goldberg, Nicolle Wallace and Rosie Perez. But this morning, the show announced that it’s most frequent guest-host over the last few months — former child star Raven-Symoné — has been named the fourth official member of the team.

“We are making huge announcement today. We’re kicking something special off,” Goldberg said at the top of the show. “We are happy to announce that Raven-Symoné is now permanently on The View!”

An emotional Raven-Symoné said, “I’m happy to be sitting with these smart, talented mentors,” before passing out some gifts to her new colleagues. “You guys, let’s have some fun!”

The new co-host, who got her start as Olivia on The Cosby Show when she was just three years old, has already discovered what it’s like to be at the center on controversy on The View. Aside from all the questions she faced over Bill Cosby’s rape allegations, Raven-Symoné came under fire in March when she defended fired Univision host Rodner Figueroa’s comments about First Lady Michelle Obama looking like she belonged in Planet of the Apes.

“Michelle, don’t fire me from this right now, but some people look like animals,” she said at the time. “Is that rude? I look like a bird! So can I be mad if somebody calls me Toucan Sam?”