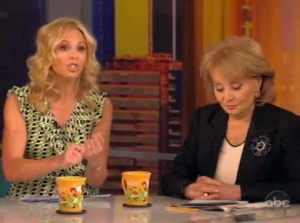 This particular story had “fighting on The View” written all over it — DNC official Hillary Rosen slammed Ann Romney on CNN, saying Romney “actually never worked a day in her life.” Romney defended herself on Twitter, writing “I made a choice to stay home and raise five boys. Believe me, it was hard work,” and Elisabeth Hasselbeck was immediately furious. She said she thought it was ridiculous that “a DNC insider and liberal insider gets out there and marginalizes and discriminates against any woman,” and Whoopi Goldberg agreed that women who stay home to raise children are working and Rosen’s arguments were not well thought out.

Ann Romney, The Republican’s Secret Weapon, Has Been Activated

Joy Behar, however, was markedly supportive of Rosen’s remarks, arguing that Romney’s experience not as a stay at home mom, but as a super rich lady made it difficult for her to understand the problems that average Americans are facing. Sherri Shepherd was more measured, wondering if Romney might be capable of understanding the plight of Americans without health insurance or who are facing similar economic problems.

What none of the co-hosts managed to hit on, however, was that talking about basically any working experience as a qualification for the presidency is absurd: being a stay at home mom does not prepare one for being a politician or being president any more than being a nuclear physicist does. But more to the point — Ann Romney isn’t running for president. Rosen’s remarks were in response to Mitt Romney’s admission that he seeks his wife’s advice on economic issues. But in the grand scheme of things, so what if he does? What does her work experience, or lack thereof, have to do with the race? We don’t get to elect the president’s spouse. It was disappointing to watch the View panel reaffirm the (sane and reasonable) point that motherhood is a job, and not question any of the more salient issues at hand, like why Ann Romney’s job matters at all.

You can see the clip here, via ABC: