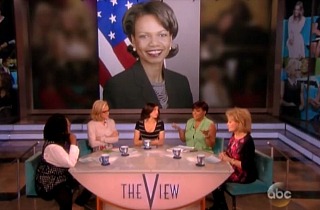 On Thursday, the hosts of ABC’s The View invited Rachel Campos-Duffy, the wife of Rep. Sean Duffy (R-WI) on the program where they debated over whether it was appropriate for Rutgers University faculty and students to protest the speaking invitation of former Secretary of State Condoleezza Rice. The conversation quickly transitioned into a broad debate over whether college liberals were less tolerant of dissenting viewpoints than their conservative counterparts.

Those protesting the Rice are citing her role in the Iraq War and the Bush administration’s use of enhanced interrogation tactics in the prosecution of the War on Terror to justify rescinding her invitation to speak.

“This is not a policy dispute,” Campos-Duffy insisted. “This is about Condoleezza Rice daring to be a black conservative.”

“They’re not going to say it,” Campos-Duffy shot back.

“Really, it’s whatever her action was during the Iraq War,” Walters continued. She said that students and faculty have protested a variety of speakers in the past due to positions they did not like. “This is not new and I don’t think, Rachel, its racist,” she asserted.

“I don’t think its racist. I think it’s political,” Campos-Duffy countered. She said that her grad school campus invited former President Bill Clinton and there were no protests in spite of the fact that this occurred at the height of the scandal surrounding his affair with Monica Lewinsky.

“I think college campuses have become some of the most intolerant real estate in America,” Campos-Duffy insisted.