Elisabeth Hasselbeck: President Obama ‘Should Not Be Singing And Having Fun Until Gas Prices Are Lower’
video

Elisabeth Hasselbeck: President Obama ‘Should Not Be Singing And Having Fun Until Gas Prices Are Lower’ 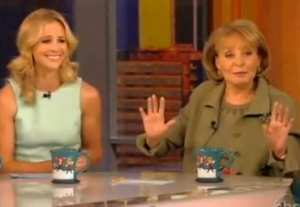 So. There was a “White House Blues” event last night, at which President Obama joined B.B. King and Mick Jagger in singing a few bars of “Sweet Home Chicago.” This continues the recent streak of Obama appearances that have afforded the president the opportunity get his karaoke on. Naturally, some people on The View were wondering — is all of this singing inappropriate?

Barbara Walters got the ball rolling, saying to Elisabeth Hasselbeck “I know that you think this was a campaign tactic.” Elisabeth took umbrage at her accusation, but Barbara gently snapped back “You already told me this.” She went on to say, “You have to remember that Richard Nixon, a very serious man, played the piano in the White House…[President Clinton] played the saxophone.” She didn’t see anything wrong with the president attempting to counter the perception that he is “cold” and “aloof” and doesn’t have a sense of humor.

Joy Behar chimed in at this point: “Every president has danced, except for FDR, because – you know – he couldn’t,” and Elisabeth took this opportunity to have her say. “I think there is a time to dance…I just think you should not be singing and having fun until gas prices are lower and people are getting jobs.”

It’s not totally clear how the President taking a “no more fun/singing” vow would help gas prices come down, but I do remember people obsessively tracking George W. Bush’s vacation days when he was in office. Maybe the lesson here is that people who already don’t like President Obama really, really don’t like to see him having any fun. Not when there are all these people out there, disliking him! You can see the clip here via ABC: