Whoopi Goldberg On The View: ‘Calling It The N-Word Makes It Cute’
video

Whoopi Goldberg On The View: ‘Calling It The N-Word Makes It Cute’ 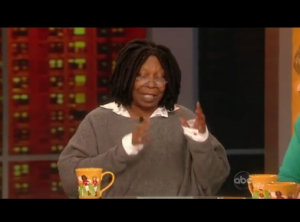 This morning, The View‘s panel discussed CNN’s recent decision to have reporters say the full “N-word” when quoting other people. Whoopi Goldberg introduced the topic, agreeing with the logic that calling it “the N-word” sanitizes the original meaning. But, although Barbara Walters agreed with Whoopi that “if you are quoting someone else, shouldn’t you be able to use the word?” she refused to actually say it herself, and admitted she would be reluctant to say it if she was put in that position.

Goldberg did most of the talking in this segment, arguing that calling it “‘The N-Word’ – it’s cute…it’s part of our history. Every time people try to make it sound better or more acceptable – let’s call it what it is.” Joy Behar interjected at this point, voicing what seems to be the fear of many Caucasian people discussing the word — that it’s different for them to use it, even when quoting somebody else. “I never liked the word, ever,” she said emphatically. That may be so, Whoopi returned, but “this idea that taking it out makes it somehow better is ridiculous. It’s a part of the culture. Let us speak on it…the word is real, and if it makes people uncomfortable you have to deal with why it makes you uncomfortable.” It’s an interesting perspective, and one that doesn’t often come up in a debate like this — that it’s not enough to come up with a euphemism for the word; in fact, that frequently prevents people from having an honest conversation about the racism that is still present in this country, and that people use the word at all.

You can see a clip of the discussion here, via ABC: