The View Weighs in on P*ssy-Gate: ‘The More I See Him, the Less I Want to See Him as President’ 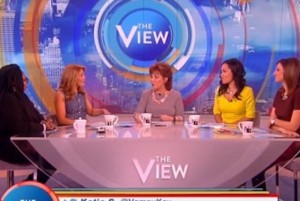 Not since Josie and her band took a rocket ride has the word “pussy” gotten this much play, but Donald Trump‘s giddy invocation of the term to insult Ted Cruz hasn’t really been examined until it gets probed by the ladies of The View.

After watching news personalities and campaign flacks fanning themselves all day over whether or not Trump’s insult was “presidential” or not, there was something refreshing about Joy Behar‘s treatment of the “scandal,” and something revealing in the way Whoopi Goldberg reacted. From The View:

Behar: He retweets things that are vile and he says I didn’t do it. I retweeted it. I didn’t say kitty cat, she did. He’s like a stand-up insult comic, this guy. His campaign stops should have a two drink minimum.

Bure: There’s an app for that, the Donald Trump app, the insult app.

Goldberg: The more I see him, the less I want to see him as president. Because I just sort of feel like, you know, I think if you were to win, you would actually think that people would think this was okay.

Behar’s reaction, while dismissive of the gendered nature of the insult, is closest to keeping this kerfuffle in perspective. Whoopi’s is the furthest from that. If you have watched Donald Trump kick off his campaign by calling Mexican immigrants rapists, and you’re not so sure about him now that he’s said “pussy” on TV, there’s something wrong with you.

But more than that, if you’ve been watching this Republican field, you should only be getting so upset that Donald Trump is saying pussy, rather than trying to get all up in it. Let’s forget the dearly departed Scott Walker, who literally wanted to let women die so he could think inside their box, and just look at what these guys said this past weekend. The two dueling “moderates” in this race, Chris Christie and Marco Rubio, are taking turns exerting control over vaginae.

At the debate, Rubio reiterated his support for restricting abortions even in cases of rape and incest, saying “It’s a human rights issue and it’s a difficult issue, because it puts in conflict two competing rights. On the one hand is the right of a woman to choose what to do with her body which is a real right. And on the other hand is the right of an unborn human child to live. And they’re in conflict. And as a policy maker, I must choose which one of these two sides takes precedence. And I have chosen to err on the side of life.”

Christie hit Rubio over his position, feinting at moderation by generously allowing that “if a woman has been raped, that is a birth and a pregnancy that she should be able to terminate,” but for the past several weeks, has also continually and explicitly called abortion “murder.” I’ll leave it to Christie supporters to figure out why, then, he supports the “murder” of some “babies” but not others, but the media has allowed the GOP to distort the issue of choice beyond all recognition, so that now, support for these two most basic exceptions somehow equals “moderation” on a constitutional right for women.

You can be mad at Trump for saying “pussy,” but I guarantee you, if one of these Republicans is elected president, Trump is the one who’s most likely to leave yours alone. Maybe the media could spend a minute explaining that, and asking why anyone who cares about women would vote for any of them.