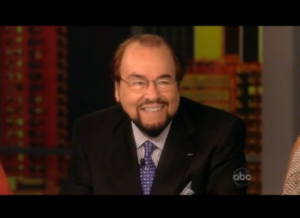 “Unbearable tension” might not be the first words that come to mind when you think of James Lipton, but that’s exactly what he caused when he appeared on The View this morning. The segment didn’t seem particularly well thought out: Lipton, a longtime interviewer of actors, was there to discuss the relative “acting ability” of Mitt Romney and Barack Obama. Or something. The segment might as well have been called “Barbara Walters Wants To Hang Out With A Friend For A Hot Minute,” but it got awkward real fast.

Lipton said that he felt Romney was trying to play two roles — that of the unapologetic rich guy and the regular dude — and failing at both as a result. But! Romney has also made a lot of charitable donations, Elisabeth Hasselbeck interjected testily.

That may be true, but it didn’t stop Lipton from criticizing Romney’s inability to smile with his whole face (in other words, he’s a bad smize-er). “These are bleak times!” Hasselbeck responded. Then, Lipton shared that Romney is “mysterious” to him (“I think he’s pretty straightforward!” Hasselbeck interrupted). Lipton simply kept talking without acknowledging that she was there.

“Oooh, [Romney’s] scary,” Hasselbeck eventually said in a mocking tone. Why aren’t we talking about his “countless donations to charity…this is like a character assault, not about acting,” she complained.

At this point everyone else at the table was ignoring her (Sherri Shepherd’s“Leave it alone” face was particularly on point) and they moved on to Romney’s wardrobe, which Lipton called a mixture of “bowling alley and country club.”

“This is torture,” Hasselbeck muttered. Later, when prodded by Walters, she snapped “Yes, I’d like to move on.”

Move on they did, with a little discussion of Ronald Reagan and Bill Clinton’s acting ability, and the segment ended with Lipton noting that he didn’t mean to attack Romney; his thesis was merely that if one is a bad actor, as he believes Romney is, he ought to work on showing voters exactly who he is, rather than trying to straddle two worlds at once. It was too little too late, so Walters ended the segment before fists started flying.