The View‘s Joy Behar: ‘I’m Sure People In Concentration Camps Made Jokes About Each Other And The Nazis’ 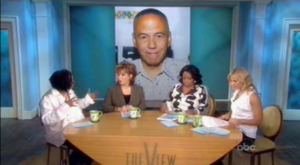 “Too soon!” or “Inappropriate!” or “Typical.” are reactions often thrown around when people in the media – like, say, Gilbert Gottfried – make controversial jokes about recent, tragic events. Gottfried, you may recall, was fired from his job voicing the “Aflac duck” after he took to Twitter to make a string of jokes about the ongoing series of disasters in Japan.

Comedien Joan Rivers weighed in on the controversy by defending Gottfried:

Oh come on people-this is just outrageous! Gilbert Gottfried was FIRED from Aflac for making jokes about the tsunami in Japan.

That’s what comedians do!!! We react to tragedy by making jokes to help people in tough times feel better through laughter.

Gottfried was, needless to say, quite pleased indeed.

The ladies of The View discussed the jokes, with Sherri Shepherd (who has done her fair share of comedic acting) saying that, while she agrees with Rivers’ basic premise, she can’t see how Gottfried’s particular jokes were helping to make anyone connected to the tragedy feel better.

Joy Behar then chimed in with… this:

I don’t know, maybe people who just need relief from the terror of it all. I don’t know, but I mean, I’m sure people in concentration camps made jokes about each other, about the Nazis, about their situation. That’s the way people relieve stress.

Shepherd explained that there’s a difference between someone cracking jokes from outside of a situation and those experiencing it using humor to get by.

After all – We’re pretty sure Nazi guards made plenty of jokes during the Holocaust, maybe even jokes similar to a victim of the Holocaust or to Jewish comedians commenting on it today. The end result? Slightly different.

Whether or not Gottfried’s jokes were funny is not the point – that’s an entirely subjective assessment, after all. The point that Behar’s comments bring up, specifically, is that it is one thing when someone in a position of relative power – sitting comfortably behind a computer in a well-lit room, not having to wonder whether he’ll ever see his missing friends or family members – makes a joke at the expense of those who are vulnerable and, in some cases, literally on the brink of death. And it’s an entirely different thing to use humor, even the darkest humor, to get through a situation as the impacted, vulnerable party. To compare a joke made by a comedian on Twitter to jokes made by victims of an atrocity or disaster shows what we’re going to hope is willfull ignorance on Behar’s part.

Watch the segment, via ABC: