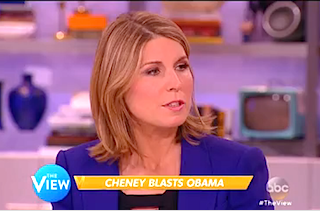 When the subject of a new Dick Cheney Playboy interview came up during Wednesday’s episode of The View, former George W. Bush Administration communications director Nicolle Wallace made no efforts to defend the comments made by her fellow Republican. Instead, she out-right rejected Cheney’s suggestion that President Barack Obama and Attorney General Eric Holder have played the “race card.”

“I wish that Vice President Cheney, who I worked with for seven years and respect him a lot, I wish he hadn’t mixed the issue with race,” Wallace said. “Because I don’t think President Obama has been strong on foreign policy. I think he’s done the sort of damage to the country, in the globe, that Jimmy Carter did, but I don’t think it has anything to do with race.”

In the interview, Cheney suggested that Obama and Holder have played the “race card” when they say race motivates some attacks against their policies. “To say that we criticize, or that I criticize, Barack Obama or Eric Holder because of race, I just think it’s obviously not true,” he said. “My view of it is the criticism is merited because of performance — or lack of performance, because of incompetence.”

Asked directly by Whoopi Goldberg if she thinks Obama has played the “race card,” Wallace said no, adding that Republicans have not held back in their criticism of him because of his race. “If this is us being restrained by race, what would we say about him he were white?” she asked. In her view, Bush got “pummeled” just as hard and he “could have been black, white, green or purple.”