‘The Voice’ Bible Takes ‘Christ’ Out Of The Bible
video

‘The Voice’ Bible Takes ‘Christ’ Out Of The Bible 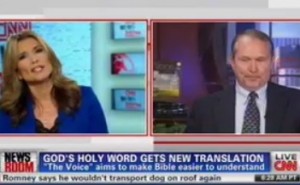 On CNN Newsroom this morning, anchor Carol Costello interviewed Professor David Capes, who has spent the last seven years working on The Voice, a new translation of The Bible. If having the Father, the Son, and the Holy Spirit judging humanity from a set of swiveling red and black chairs sounds like fun to you, this The Voice will be a disappointment. Not only is there no place for Cee Lo to sit, this new Bible also does not contain the words “Christ,” “angels,” or “apostle.”

Having seen how people freak out when you take “Christ” out of “Christmas,” I can only imagine how people will react to having it taken out of The Bible. According to Capes, though, “People don’t understand exactly what ‘christ’ means. You ask a lot of Christians and people who read the Bible frequently, they think ‘christ’ is a name. Jesus Christ. Jesus is his first name. Christ is his second name.”

Unfortunately, he doesn’t get around to explaining the middle initial “H.”

Calm down, that doesn’t mean The Voice Bible is shaped like a groupie’s chest and comes with lines of blow on it. Capes says the idea was “to translate everything, to give them the meaning of the text and to give them a sense of where the story, this great story of love and redemption is going.”

That’s all well and good, but the 23rd Psalm, in my view, doesn’t need to be updated to “Yeah, I’ve been in a really bad place lately, but Rod and the rest of your staff have been a great comfort to me, especially your assistant Sheila. She always knows the right thing to say.”

I made that one up, but the examples that Costello does point out don’t really seem like improvements to me. Of course, I was raised in a church chock full of King James purists. As far as we were concerned, anyone with a New International Version might as well have been reading a Playboy.

Although I’m not religious now, there are many passages from the King James Bible that are beautiful, evocative, inspirational, and wise. One of my favorites is John 14, which brings tears to my eyes whenever I read it. It would pain me to see it altered in any way, but especially with an eye toward accessibility. “Don’t trip, bro-postles! There’s enough Heaven to go around!”

Bible snobbery aside (the King James translation isn’t considered the most accurate, or even close), there’s something to be said for exposing a new group of people to something beautiful, an argument that was, oddly enough, deployed by CNN contributor John Fugelsang this morning, in defense of Hologram Tupac.

Maybe that’s a good case for The Voice Bible, but when they try to send Hologram Jesus on tour, I’m out.