The War on Christmas Is Back! O’Reilly Takes on “Anti-God” Ads
video

The War on Christmas Is Back! O’Reilly Takes on “Anti-God” Ads 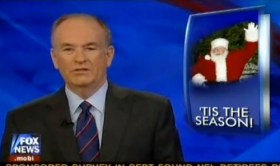 Every so often, we can really see why so many people tune into Bill O’Reilly every night. He can be engaging and charming and has a sense of humor — which, despite whatever outrage he’s fomented about the so-called “War on Christmas” in the past, was clearly on display tonight as he returned to that favorite topic. Tonight, O’Reilly zeroed in on “anti-God” ads by the
The American Humanist Society. That may be a bit of an exaggeration, since the ads are less anti-God than pro-atheism (the tagline is “No God? No Problem!” with a kicker of “Be Good For Goodness Sake!”), but atheism certainly isn’t pro-God, so it does make sense. O’Reilly seems more amused than perturbed by it, and maybe even seems to be spoofing the usual umbrage just a little.

O’Reilly welcomed Gretchen Carlson and Margaret Hoover to discuss the issue, and while Hoover seemed just as amused as O’Reilly, Carlson definitely took offense (“This is a direct and deliberate smear against Christianity”). Here’s where we’re sure O’Reilly was just having fun with her: “Why do they loathe the Baby Jesus? He’s just a baby!” Carlson maintained that they are trying to capitalize on the growing ranks of atheists, but O’Reilly wasn’t convinced: “How do you sell atheism by running down a baby?”

O’Reilly had a theory about the reason for the ads: Jealousy. “What do atheists have in December, the latest Bill Maher special?” At this point someone off-camera laughed, and you had to know that no one thought he was serious. Except, maybe Carlson: “Oh, please, you don’t think atheists exchange presents with one another? They just don’t have Jesus!” This is a highly enjoyable segment about some fairly obnoxious ads, and I enjoyed it greatly. Watch below:


Career Daily Show watchers will recall that Jon Stewart took on O’Reilly’s “War on Christmas” mongering back in 2005 (after O’Reilly complained that it was part of a “secular progressive agenda” — a phrase that he was popularizing on his show well before the publication of his book, Culture Warrior, in fall 2006, that officially coined and used that phrase). Stewart’s choice rejoinder is below. Merry Christmas! Happy Holidays! God bless us, every one!

p.s. Congratulations to the lovely Margaret Hoover on her marriage!