The White House Goes to War with Elizabeth Warren
video

The White House Goes to War with Elizabeth Warren 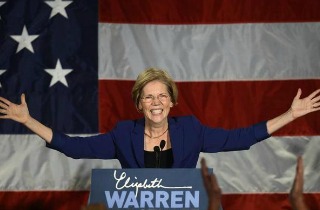 Save the few who credulously take elected officials at their word, political analysts know full well that the 2016 presidential cycle is upon us. In fact, it is nearing maturity as the “invisible primary,” in which candidates vie for primacy within their party and the fealty of eligible donors, is now perfectly visible.

It is at this stage in an election cycle when backroom brawls spill out into the streets. That phenomenon is most observable among Republicans, as the party’s 2016 hopefuls take veiled shots at one another through inference and innuendo. The Democratic Party, too, has taken to airing its dirty laundry in public.

Over the weekend, the political press gasped when Vice President Joe Biden jabbed at former Secretary of State Hillary Clinton by taking a shot at her husband’s economic record. He attacked the Clintons from the left, asserting that the seeds of the gaping income disparity that preoccupies Democrats today were sown in the 1990s. Even the political press, myopically focused on Republicans’ squabbles, could not ignore such violent internecine rhetoric.

Perhaps the most significant quarrels, however, have been between establishment Democratic officeholders and the definitely-not-running-for-president Sen. Elizabeth Warren (D-MA).

Warren has been fortunate in that she has been able to refrain from mounting passionate attacks on establishment Democrats herself – her fawning surrogates in the liberal commentariat have enthusiastically engaged in that messy work for her. Influencers ranging from MSNBC’s Krystal Ball, to The Hill’s Juan Williams, to The Chicago Sun-Times’ Lynn Sweet have all observed that Warren represents the Democratic Party’s passionate left flank. The contrast, they say, between the galvanized progressive wing and the exhausted contingent loyal to President Barack Obama and his preferred successor is stark.

After two terms of Obama, and with voters firmly asserting that they are desperate for a change from the candidate of change, Warren is better positioned than either Clinton or Biden to energize the coalition that twice elected the president. Warren herself has thus far been able to remain outside the fray. Recently, however, she has joined the fight.

In an appearance on HuffPost Live, Warren fired a shot over the Obama wing’s bow that no one could misconstrue. “Like I say in the book,” Warren began, “the president chose his economic team, and when there was only so much time and so much money to go around, his economic team chose Wall Street instead of American families who were in trouble.” Few noticed that she was careful to praise the president in the next breath. The wind was knocked out of the political establishment.

On Monday, the Democrats’ White House wing began fighting back against Warren and the tide of progressivism of which she has become the de facto leading figure. In an upcoming book from former Treasury Secretary Timothy Geithner, the party’s establishment makes their feelings about Warren and her ideology perfectly clear.

“I had a complicated relationship with Warren,” Geithner confessed in his book. He declared that her performance in “oversight hearings often felt more like made-for-YouTube inquisitions” rather than “serious inquiries.

In an interview with CNBC’s Andrew Ross Sorkin, Geithner further stressed his differences with both Warren and the strain of progressivism she represents. Geither cautiously chided Warren’s Occupy Wall Street mentality, and suggested that her unrealistic philosophy, one which stresses mob justice over the dispassionate and sober stewardship of the American economy, is dangerous. Watch below:

Geithner invoked no less a figure than President Bill Clinton on CNBC on Monday when he revealed that the 42nd President confessed to him that “people wanted blood” in the wake of the 2008 financial collapse. “You could take out your favorite investment banker and slit their throat in the ally, and the next day people would want more,” the former secretary said. “He was making the observation that that amount of anger is something you can honor by trying to fix the problem. It’s hard to honor and satisfy by going out and shooting people.”

Employing an extended metaphor about an airplane hijacking, Geithner insisted that the Warren wing of the party was ill-advisedly determined to spend 2009 going after the “bad guys” responsible for the economic crisis. “But you’ve got to land the plane first,” he insisted. “When you land the plane safely, you can figure out how you can bring a measure of justice to the people responsible.”

Geithner’s words are gasoline on a smoldering flame. For Warren and her supporters, that “measure of justice” never came. There was no blood in the street, no storming of the citadels of financial power, no reversal of fortunes for those in positions of authority during the crisis years. Warren’s supporters never forgot that or their disappointment in Obama for abandoning the front. They want revenge.

The schism within the Democratic Party between the invigorated economic populists and the party’s intellectually spent technocrats is real. These early skirmishes portend greater seismic shifts in the center of gravity of the party in power. Warren could easily be the beneficiary of that shift if she truly becomes the threat that the White House perceives her to be.