The Wisdom Of Banning Pressure Cookers

The Wisdom Of Banning Pressure Cookers 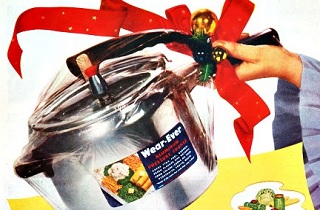 Like little children, gun nuts say the darnedest things, things that would be just as adorable if they weren’t killing people. The Boston Marathon bombing and its aftermath have managed to draw out some topical variations on popular gun nut tropes, but one of them, the sarcastic suggestion that the government ban the pressure cookers that were used to make the bombs, actually has some relevance to the current gun debate. It recently made the species jump, from Twitter gun-nut spider monkeys to the better-paid cable news variety, and deserves serious consideration.

First, though, let me explain my use of the term “gun nut,” which is probably off-putting to a lot of folks to whom it does not apply. It is intended to be a shorthand (admittedly, a derisive one) to describe a very specific set of people, but it isn’t meant as a slur on all gun owners, or even all opponents of gun reform. A gun nut is someone who isn’t just opposed to sensible new gun reforms, but is opposed to even the meager federal gun laws we have now, like a ban on machine guns and/or personal nuclear weapons. A gun nut is someone so committed to personal armament that they will argue against the enactment of any laws against anything. If you think that a national gun registry will be the result of improving the background check system that we already have in place by specifically making such a registry more illegal than it already is, you might be a gun nut.

If you think the Bureau of Alcohol, Tobacco, and Firearms is just a description of your desk, you might throw a wild party, but you also might not be a gun nut. If you recognize the necessity and efficacy of our existing gun laws, even if you oppose the new ones, you are at least qualified to participate in an intelligent, productive discussion about them. Hence, you are not a gun nut.

One of the tired gun-nut tropes that gets trotted out in an emergency like the Boston bombing is the notion that, when things go to hell, everybody suddenly wants a gun. This actually makes a certain amount of sense,  and to be honest, several friends and I have designated the local hardware story as a rally point in the event of a zombie apocalypse. The problem with this notion, as voiced by people like Fox News’ Chris Wallace, is that it has no relevance to the current gun debate. There is no proposal that would restrict a person’s right to amply defend their own home. A pump action 12-gauge Mossberg would have sufficed to repel an unwelcome doorknock from Dzhokhar Tsarnaev, or even his brother (before he was shot, run over, and, if I’m not mistaken, had an anvil dropped on his head). The right to defend one’s home is not remotely in question.

The other gun nut cliché that has surfaced this past week is a variation on the idea that we should ban anything that kills people; common examples include automobiles (a really stupid example, since any gun reform advocate would immediately sign a deal that subjected firearms to the way we strictly regulate motor vehicles) and, in the aftermath of a mass-stabbing that killed no one, knives. As you can see, this argument almost always succeeds at proving the gun-reform point if you think  about it for longer than it takes to say it out loud.

That pressure cooker thing is a puzzler, though, isn’t it? It’s true that the Boston bombing suspects also used guns to kill people, guns that they could easily have purchased legally, and it’s also true that the gun lobby foiled a years-ago attempt to make the explosives used in the bombs easy to trace, but what are you going to do, ban pressure cookers?

In case you missed Lawrence O’Donnell‘s several excellent segments on the subject, the National Rifle Association has, for decades, stymied efforts by the government to require microscopic tagging agents (or “taggants”) in gun powder like that used in the Boston Marathon bombings, which could have made it easier to identify and apprehend the suspects. Now that one of them is dead, and the other in custody, it might seem like the taggant program would have made little difference in this case, but that’s not true. Unless you’re inclined to take the surviving suspect at his word, taggants in the Boston bombs would have allowed the F.B.I. to trace the explosives to their source, and possibly to others involved in the plot.

So even though the gun nut attempts to politicize the Boston bombings have, thus far, demonstrated that a. Local and state gun laws are easily skirted without federal standards, and b. The NRA and the gun lobby have already made investigating the case more difficult, and c. Residents of the Boston area are, and will always be, free to arm themselves for home protection, perhaps there is a lesson to be learned from the suggestion that we ban all pressure cookers.

Frankly, I’ve got nothing, There isn’t a single rational reason to ban pressure cookers, or a chance in hell that such a ban could ever be implemented. I suppose some research could be done to design a safety feature that would reduce their utility as bomb receptacles, but there are enough other ways to improvise an explosive device to render such an effort futile. That’s what the “I” in IED stands for, you know, “improvised.”

So, why did the Boston bombing suspects use improvised explosive devices, anyway? They set two pressure-cooker bombs, one of which killed three people, while the other killed no one, but the two bombs injured up to 282. Did they elect to make a low-explosive device at home out of a merciful impulse to reduce the number of casualties? Did they make pipe bombs to throw at police because they wanted not to kill any of them? Why didn’t they go out and buy some ready-made bombs, or a high explosive like C-4?

I don’t think it was out of some merciful impulse, I think it was because those items are tightly regulated by the federal government, and therefore difficult for criminals to obtain. In fact, one of the laws we use to regulate them is the National Firearms Act, the same law which, as pro-gun Newtown parent Mark Mattioli points out, has successfully and effectively banned the use of machine guns in the United States. Sure, we can’t ban the innocuous components of homemade bombs, like pressure cookers, but by banning and regulating the more lethal bombs and bomb components, we force the use of less-lethal alternatives. Without the NRA, we could further enhance our ability to thwart even homemade bombs.

If you apply the pressure cooker analogy to firearms, then, what you’re saying is that we can’t outlaw the innocuous components of homemade guns (which are also subject to the National Firearms Act), but ready-made firearms, parts, and accessories are fair game, which suggests a legislative regime far in excess of what is currently being proposed. Note to gun nuts: when you use “inescapable logic,” it’s not supposed to entrap you.

The same effect has been demonstrated in the government’s much-maligned efforts to make air travel safer. You’ll hear many of the gun crowd’s complaints echoed in the public’s dissatisfaction with the TSA’s bans on shampoo, forced shoe-removal, and creepy full-body scans, but what no one ever seems to notice is that these things have combined to force terrorists to use explosives that don’t work, unless your objective is to burn your own balls off. Even though the Christmas Bomber managed to worm his way through every precaution, the end result was that he couldn’t kill as many, or any, of the people he wanted to.

In much the same way, forcing every gun purchase to include a background check and/or banning high-capacity magazines and assault weapons would either force killers to use less-lethal alternatives, abandon them altogether, or obtain them on a black market that would become a much easier target for law enforcement. Nobody wants there to be more stabbings, but they are a demonstrable improvement over mass shootings.