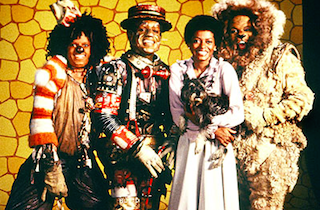 NBC’s Peter Pan Live! starring Allison Williams and Christopher Walken may have drawn less than half the viewers as the previous year’s The Sound of Music Live! but that doesn’t mean NBC is done with this new annual tradition quite yet.

On Monday, the network announced that the next musical in its live series will be The Wiz, also known as the all-black version of The Wizard of Oz. The musical, which won the Best Musical Tony Award in 1975 and became a celebrated film three years later, is set to air on December 3, 2015. No casting his been announced, but based on their previous productions, NBC will likely aim to bring in actors who appeal to a young audience. Perhaps Rihanna as Dorothy?

NBC is partnering with Cirque du Soleil for the production, which will subsequently appear on Broadway the following season. Director Kenny Leon will helm both projects. Already, many outlets are citing the runaway success of Fox’s Empire as the driving force in NBC’s decision to pick The Wiz. They had said they were also considering The Music Man.

In the end, Peter Pan had about 9.2 million viewers and a strong 2.4 rating in the 18-49 demo. That is still good by today’s standards, but came no where near the remarkable 22 million people who watched The Sound of Music one year earlier. But, as even Allison Williams admitted in the weeks leading up to this past year’s show, a lot of those people were probably hate-watching.

“If you’re going to watch this the same way that you watch a TV show that you hate, but you hate-watch it with all your friends so that you can drink wine and tweet at each other about how it’s bad, you need to just go ahead and take those lenses out of your glasses and put in the lenses that you had when you were six,” she told Time magazine.

Enjoy the Michael Jackson and Diana Ross version of “Ease on Down the Road,” which is guaranteed to be better than anything that happens on NBC in December: