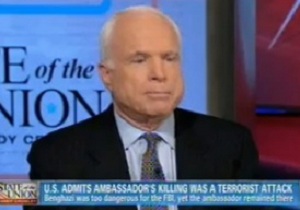 Viewers of CNN’s State of the Union with Candy Crowley were treated to a rare and wonderful sight Sunday morning, when Sen. John McCain (R-AZ) was momentarily possessed by the spirit of Rev. Jeremiah Wright, the bogeyman preacher that became the right’s go-to bogeyman during McCain’s unsuccessful 2008 presidential campaign. McCain, himself, resisted attempts to draw the fiery preacher into that campaign, and maybe this explains why. Referring to recent attacks in Afghanistan, McCain told Crowley “The chickens are coming home to roost.”

That line, as any veteran of the 2008 campaign will tell you, was prominently featured in the rotation of two or three Reverend Wright quotes that played in a near-constant rotation on Fox News. Rev. Wright was describing the terrorist attacks of September 11, 2001 as blowback from U.S. foreign policy, a concept that Rep. Ron Paul (R-TX) expanded on during a 2007 Republican primary debate, to jeers from the audience and rebuke from Rudy Giuliani. There are, of course, fair distinctions to be made in the timing and manner of Rev. Wright’s delivery, but both he and Ron Paul got about the same reaction, which indicates that if you connect terrorist killings with U.S. policy, you’re an America-hater who thinks we asked for it.

On Sunday morning, however, Sen. McCain did exactly that, drawing a straight line from the ongoing rash of “green on blue” killings by Afghan security forces, and the United States’ Afghanistan policy. “The chickens are coming home to roost,” McCain said, “and the President won’t even talk about it.”

Apparently, it’s perfectly fine to blame America if the President is a Democrat. This isn’t an isolated case, either, it’s just remarkable for the way McCain directly quotes Rev. Wright, who was, himself, quoting Malcolm X. Since the attack in Benghazi that claimed four American lives, Republicans have engaged in a chorus of America-blaming, echoing McCain’s sentiment that U.S. foreign policy has somehow invited the violence and unrest that erupted in its wake.

There is a world of difference between saying “We brought this on ourselves,” and saying “The current circumstances indicate that a different course is warranted, and that course is…”

In Sen. McCain’s case, at least he offers a nugget or two of specificity in that department, suggesting that the U.S. arm Syrian rebels, for example, which is similar to the process that wound up arming the Libyan terrorists who attacked us. That doesn’t necessarily mean we shouldn’t do it (or that we aren’t; the C.I.A. isn’t playing Tiddlywinks, but they’re the C.I.A. You’re not supposed to know what they’re doing). What it means is that there are consequences to U.S. foreign policy that are complicated, and require more than a barnyard analogy to assess.

It’s also car-elevator rich that Sen. McCain would accuse President Obama of not talking about Afghanistan, considering how the presidential nominee of his own party, Mitt Romney, failed to mention the conflict, or those fighting it, at all in his nomination acceptance speech.