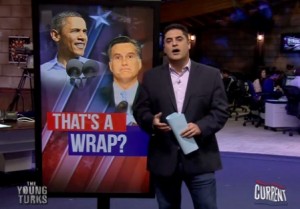 As any lifelong Jets fan will tell you, it really never is over until it’s over, but The Young Turks‘ Cenk Uygur has decided to tempt fate by metaphorically cutting away to an airing of Heidi. On last night’s episode, Uygur took a look at the recent polls, and a “devastating” ad from Priorities USA Action that’s gotten huge play in Ohio, and said “I’m calling the election right now. It’s already over.”

Calm down, or as Cenk would say, you’re at a 12, when you need to be at a 6 or 7. While Cenk has more to go on than Mitt Romney‘s pollsters do right now, this is no time for premature eleculation.

Explaining part of the reason the President is apparently crushing Romney in the crucial state of Ohio, Cenk cited “Frank Luntz of all people, who’s the Republican pollster, top pollster, points to this one ad that Priorities USA , Obama’s Super PAC, ran. And I agree with him. Look at how devastating this ad is.”

The ad he’s referring to is one of several (to put it mildly) in which former employees tell horror stories about Mitt Romney’s Bain Capital. In this case, it’s the story of Mike Earnest, an Indiana man who was forced to build the stage from which he would, upon completion, be fired. “It was like building my own coffin,” Earnest says in the ad, although at least when you’re building a coffin, you know it’s a coffin.

“Damn, God that’s powerful,” Cenk said. “You know Ohio, they’re blue-collar, so many jobs were saved because of the auto bailout, they see an ad like that and in the words of Frank Luntz, remember the top Republican pollster, ‘Devastating.'”

He also noted that “Ohio voters have correctly picked the winning presidential candidate in the last 11 elections. But it gets better. No Republican has ever won an election without winning Ohio. He’s down by 10. We don’t have that much time to go. Tick-tock, tick-tock. This thing is over.”

Things are looking very good for President Obama right now, but Obama campaign Press Secretary Jen Psaki had it exactly right when she said that they’d rather be where they are than where Romney is, but that they’re campaigning like they’re five points behind in every state. This isn’t just about avoiding overconfidence, or a superstitious jinx, though. Political analysts of every stripe quote historical data like the fact that no Republican has ever won without winning Ohio. Aside from the fact that the entire history of presidential elections provides too small a sample over too long a time period to have any predictive value, this type of analysis ignores the more important fact that we’ve never had an election like this before, in a million different ways.

For one thing, this election is the first in the true social media age. Even in 2008, the media landscape was drastically different. At this point four years ago, Barack Obama only had to get through ten or so news cycles, whereas this year, it’s more like eighty. A lot can happen in forty days, and under the new media microscope, not as much has to happen to trip you up. John McCain had his “Lehman moment,” but Mitt Romney has suffered a string of disasters since August, and he’s still hanging in there.

But the biggest obstacle to an early endzone dance is the bane to democracy that is the undecided voter, that member of the 3 to 4 percent of the stupidest voters in America who will decide everything. God help President Obama if Romney secures Honey Boo-Boo’s endorsement.