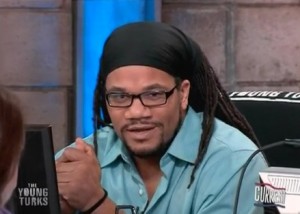 On Monday, we reported on Rick Santorum‘s supposed use of the words “black people” during a campaign event in Iowa Sunday, and I was apparently the only person in the non-conservative world who thought he hadn’t said it. I faced a fair amount of pushback on the issue, which was, thankfully, mostly polite. I discussed the issue on Twitter with Salon‘s Joan Walsh, who asked, in good faith, if anyone else agreed with me. Few did.

Since then, I’ve been joined on this lonely island by The Plumline‘s Greg Sargent, and now, The Young Turks‘ Jayar Jackson, who explained, last night, that he didn’t think Santorum said “black people,” but more importantly, that the issue is somewhat moot. Host Cenk Uygur, for his part, still wasn’t buying it.

“I remember…when this first came out, it seemed like it was a bit of a stumble,” Jayar said, adding, “I feel like you didn’t hear the full word.”

Here’s the TYT clip, which loops Santorum’s remarks together a few times. I’m hearing a long “I” sound, and no hard “K” sound:

It doesn’t really matter how many, or few, people agree with me, I’m either right or I’m wrong. I mention Jayar and Greg Sargent simply as a way to dispel, for anyone who doesn’t know me, the notion that I have any interest in defending Rick Santorum for any reason other than the merits.

By the same token, I don’t think Joan Walsh, or Keith Olbermann, or CBS News and NPR, are acting in bad faith when they report Santorum’s remark as “black people,” because yeah, that’s what it sounds like. Additionally, Santorum really didn’t help matters by waiting three days to explain himself. I contacted his campaign multiple times over that period with a link to the video, and it is fair to ask why, the first few times he was asked about it, he hadn’t seen the clip yet. Most people, upon being asked about a racist comment they might have made, would immediately check the video.

This demonstrates, at best, a disturbing apathy on Santorum’s part, that he didn’t care enough to take 30 seconds to watch the video I sent him four times (and was also forwarded to him by a conservative colleague). Furthermore, I sympathize with liberals who think his days-late explanation sounds like bullshit, exactly because it so closely matches the explanation in the column I sent him four times.

It also matters because the Santorum quote is now obscuring the fact that Newt Gingrich actually did make a bona fide, undeniably racist statement yesterday, a far more significant one in that it exposed the inherent race-baiting in his constant references to President Obama as the “food stamp president.”

What I would like to see now, then, is for all of the conservatives who congratulated me for my honesty about Santorum to show similar honesty, and call Gingrich out for his neo-Southern Strategizing, which he has been doing for a long time.

As it happens, Joan Walsh appeared on The Ed Show last night to discuss Santorum’s remarks (Schultz, while he isn’t convinced by Santorum’s explanation, creditably left the question open), and she’s still not buying it. Fair enough. However, Schultz played yet a third version of the remarks, taken from a closer position, with even clearer audio. Honestly, check it out, and tell me there’s no way he was saying “mmbligh.”