TheGrio Columnist On MSNBC: If Herman Cain Could Become The ‘Color Of Water’ He Would Do It 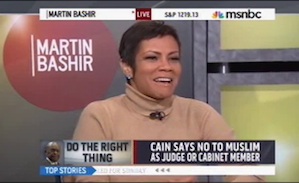 This afternoon on MSNBC’s Martin Bashir , guest Goldie Taylor, a columnist at TheGrio.com criticized Herman Cain for suggesting racism was no longer holding anyone back in America and said the former Godfather Pizza CEO would shed his ethnicity today if it was possible. “If he could become what I would call the color of water, he would do it.”

“The way that he raises his candidacy is that he placates a base,” Taylor opined. “And the base that he believes he’s after is a right-wing ultra-conservative base that does not want to either see racism as a dilemma or see it as an attack on them.”

Bashir asked the columnist to clarify her characterization of the Republican frontrunner. “You’re almost saying that he’s trying to denude and diminish his own ethnicity in order to win that base, is that what you’re saying?”

“That’s exactly what I’m saying!” Taylor exclaimed. “He would do it in an effort to prove that he and people just like him could fit in anywhere and have the same level of success no matter what their race, ethnicity or gender happen to be. That just doesn’t happen to be the case. And so, would he shed it? I think he would.”

Bashir questioned Taylor whether she thought Cain was appealing to the Republican base because of perceptions that the tea party was racist.

“I would not say the tea party as a rule was a racist movement,” Taylor explained. “What I would say is that it leaves open ground for racism and bigotry to fester and that probably is much more insidious. For Herman Cain to attempt to placate this base, well that’s the grand irony, because he never can. And so as much as he tries to shed or become more light or to assimilate, there’s never going to be an occasion that he actually can. So can he win a GOP nomination from the Republican Party? Not on your life!”