‘They Died for Nothing?’: Jake Tapper’s Interview with Lone Survivor Vet Gets Tense
video

‘They Died for Nothing?’: Jake Tapper’s Interview with Lone Survivor Vet Gets Tense 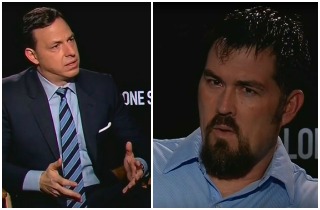 CNN host Jake Tapper’s Interview with the subject of the Mark Wahlberg film Lone Survivor, Marcus Luttrell, became tense on Friday when the veteran of Operation Red Wings apparently took offense at Tapper’s suggestion that the botched mission was a mistake. Luttrell defended his fellow veterans who lost their lives in that operation and asked if Tapper was suggesting that they died “for nothing.”

Tapper said that he was struck by the loss of life and the sense of “hopelessness” he felt while watching the film adaptation of that mission. “And I was torn about the message of the film” he said, “in the same way that I think I am about the war in Afghanistan itself.”

“I don’t know what part of the film you were watching but hopelessness really ever came into it,” Luttrell replied. “Where did you see that? We never felt like we were hopelessly lost or anything like that.”

“We spend our whole lives training to defending this country and then we were sent over there by this country, so you’re telling me because we were over there doing what we were told by our country that it was senseless?” Luttrell asked. “And my guys, what? They died for nothing?

“That’s what you said,” Luttrell shot back.

Tapper concluded by critiquing the “decision making at the command level that led to the operation” and noted that many question whether the target of this operation was “worth the effort” and the lives lost. He added that no one has been held accountable for that poor planning.

“May they rest in peace and may their families, and Marcus Luttrell, find peace here on earth,” Tapper concluded.

An earlier version of this article identified the film Lone Survivor as Sole Survivor.