‘They Lied To Us’: Judge Napolitano & Shep Smith Rail Against Gov’t Agencies Clamoring For NSA Data 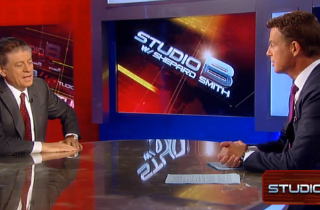 Appearing on Studio B this afternoon, Fox senior judicial analyst Judge Andrew Napolitano reacted to the New York Times reporting that several government agencies would like access to the private information collected by the National Security Agency.

“You predicted this,” host Shepard Smith remarked after introducing the story. When Napolitano noted that the government had initially claimed the NSA was only capturing metadata as part of its NSA programs, Smith asserted: “They lied to us.”

The Times report indicates that other departments, including the DEA, have clamored for the data to pursue their own investigations. Napolitano railed against this as clearly “prohibited” by the Fourth Amendment and other statutes that limit the NSA’s surveillance powers to combating terrorism and not to other crimes.

“The conspiracy theorists must have a hell of a time,” Smith responded.

“The DEA itself it has been getting these tips from the spies about who are bad guys out here — domestic bad guys that have nothing to do with terrorism,” the judge said. “When and how will this end? Why is there no outrage?”

“I don’t know, judge,” the host concluded. “When you give away information to credit card companies and banks and all the rest, you have to sign a thing saying I’m giving it to you. The government is taking it and they’re prosecuting citizens for leaking information about it, as they leak information about it, too. Those are the facts.”