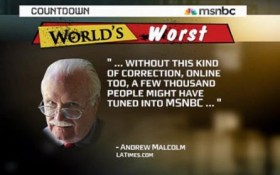 Steve Krakauer wondered Friday if the LA Times would make Countdown’s “Worst Persons” list for mixing Keith Olbermann’s newscast up with MTV’s “Jackass” in its TV listings. Sure enough, it did. In the number 3 spot, Olbermann went off on a long, mean-spirited rant to counter what he imagined to be an insult to his audience size.

Olbermann took offense at a particular phrase in the LA Times’ correction, “without this kind of correction, online too, a few thousand people might have tuned into MSNBC,” taking it as a slam on his ratings. In reality, the Times’ Andrew Malcolm was referencing the few thousand people who use the Times’ TV listings, not Olbermann’s total audience. It was arguably a self-deprecating remark.

Olbermann then proceeds to crow about his ratings, and lustily anticipates the demise of the LA Times, and the unemployment of everyone who works there. He took no apparent offense, however, to Malcolm’s premise that people might not know the difference between Olbermann and “Jackass,” perhaps because he was in the process of proving it. It is a shame that a guy like Keith, who has previously displayed such a great sense of humor, can show none about himself.

Malcolm gets the last word in beautifully, however, and with subtlety, in an update to his correction. He starts out by saying that about half the Countdown audience tweeted him about the “Worst Persons” segment, then calls back to it a few paragraphs later, saying, “But both of those Friday Olbermann viewers said they were amused.”

(Ed. This post was originally posted at Tommy’s Daily Dose, but one more point: It’s worth noting that Olbermann used half the time for WPITW on Malcom, including bringing in the partisan claim that, per the above, turned out not to have been implicated. The other half was devoted to worthy targets: Tom DeLay and Betsy McCaughey, with a solid Death Panel joke in there for good measure. It’s Olbermann’s platform and he can do with it what he wants, but he’s just so much more effective when he’s targeting people who really need the takedown. -RS)