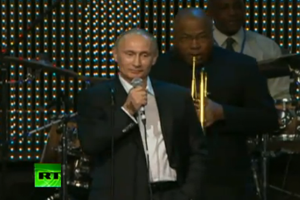 Renaissance man Vladimir Putin is at it again. Inspired by the illustrious musical repertoire of Venezuelan TV show host/crooner Hugo Chavez (or perhaps feeling the ’90s vibes after watching acclaimed saxophonist Bill Clinton recreate his presidency yesterday, the Russian president took to a lonely piano to play a heartfelt rendition, then sing a heartfelt rendition, of “Blueberry Hill.” In English. On television.

The president appeared with an entire back-up band, swaying to the beat like the leaves of a willow on a cool summer’s eve, for a charity fundraiser. According to the channel Russia Today:

When the hostess approached Putin’s table and asked him to sing for the audience, his immediate reaction was “are you kidding me?” But the hostess was determined to get the prime minister on the mic and reminded him about the songs he sang with the Russian sleeper agents extradited from the US last summer. Putin attempted to evade the proposal by saying that the singing she was referring to had come from the heart. However, after seeing the pictures of ill children shown to the audience on the big screen, he took to the stage.

He’s got a pretty great (understandably) Russian accent, and would probably make tons of money playing weddings in America, should he want a change of lifestyle. Not that he needs this new, cool appeal straight out of a Michael Bublé greatest hits album– the women of Russia routinely disrobe in his honor, and, lucky for him, he’s not gay or anything— but it certainly can’t hurt. As for the extremely fortunate crowd that got to see the overwhelming talent of their prime minister? They seem positively enthralled.