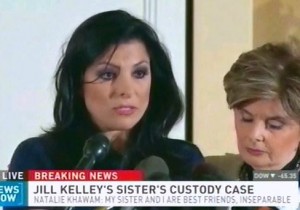 Natalie Khawam, the sister of socialite Jill Kelley, held a press conference today with her lawyer Gloria Allred. Neither Khawam nor Allred specifically addressed the scandal involving Kelley, former CIA director David Petraeus, and Paula Broadwell during the press conference, but with Khawam telling reporters she supports her sister and looks forward to sharing the whole story at a later time.

Allred explained that the press conference was being held, in part, to respond to what has been said in the media about Khawam in the midst of the ongoing scandal.

“Natalie is just one of the mothers in this country who has been forced to suffer because of family court decisions,” Allred said, faulting a judge for not taking into account allegations of alleged domestic abuse by Khawam’s ex-husband.

One of the most notable details about Khawam revealed in the ever-expanding scandal is that after a judge awarded sole custody of her four-year-old to her husband, she appealed the decision and presented letters of support from both Petraeus and General John Allen, the latter of whom was allegedly sending Kelley thousands of e-mails.

Both Kelley and Khawam have visited the White House three times since September.

You can watch an excerpt of the press conference below, courtesy of HLN: