This Happened: Trump Campaign Manager Derided Hillary For Literally Being Too Substantive 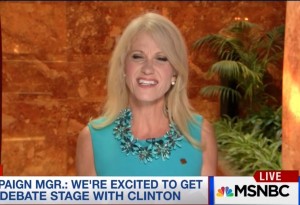 If you see enough pigs fly, you eventually get used to it, and so it is that metric Trump-tons of surreal insanity go unnoticed during the 2016 presidential election, to include an incredibly telling moment Tuesday afternoon. MSNBC horse-race expert Steve Kornacki was interviewing freshly-minted Donald Trump campaign manager Kellyanne Conway, who is supposed to be the smart, moderating, mature influence on this candidacy, and in the midst of trying to fend off questions about the debates, Conway took several incredible shots at Hillary Clinton.

In fact, forget Conway’s ridiculous assertion that Hillary Clinton hasn’t taken clear policy positions, and just pay attention to the way she wrinkles her face like she’s just been crop-dusted by Paul Manafort after a taco-bowl binge while she makes this unbelievable critique (emphasis mine):

I think people want to know what Hillary Clinton thinks about the issues literally have to tune into those debates to watch it. That’s a shame that people have to wait until September 26, here in New York, to listen to what Hillary Clinton believes, unless you want to go to the website and click, what she believes on different policies.

Yeah, and why should voters have to wait for Hillary Clinton to show up and physically carry them somewhere, unless they want to get in a “car” and “drive” places?

This is where we are now, where Kellyanne Conway’s ridiculous charge that Hillary Clinton never talks policy, when all she’s done for 25 years is talk policy in at least equal measure to every other thing she does in her life combined, when that ridiculous charge is rendered unremarkable by the other, much more ridiculous thing that a presidential candidate’s campaign manager just said. Having a website that documents your detailed policy plans is a good thing! That this needs to be said is an absurdity, one which, in a just world, would cause people to check out the “Issues” section of Donald Trump’s website, to discover that it consists entirely of minute-long vlogs.

Now, I’m sure that Kellyanne Conway is aware that having a website with detailed policy documents is actually an asset, not a liability, but she also knows that like a freestyle rapper battling an Amish mute, it doesn’t really matter what comes out of her mouth, because it won’t be challenged. Every syllable she said in that clip was ridiculous, and yet our representative in the media just nodded along and pretended it was all normal. Mika Brzezinski is a prophet for the ages.