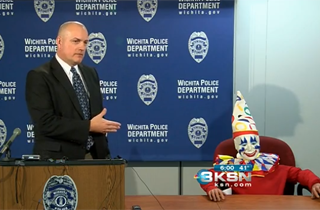 What do you do when your city’s beloved creepy clown mascot goes missing for ten years, only to be discovered in the home of a convicted pedophile? You hold a press conference for it! Yaaaay! (No, we’re so grossed out.)

The story of Louis the Joyland Clown is a lurid, clickbait-y one: the adored organ-playing mascot of the Joyland Amusement Park in Wichita, KS, Louis was stolen back in 2005, shortly after the park closed for good. “There’s many articles that said once Louie disappeared, he would never see the sight of day again,” said Det. Matt Lang of the Wichita Police Department in a press conference, before pointing to an immobile clown doll next to him. “Well, here he is.”

The detective went on to describe how they found him in the house of Damian Mayes, a former Joyland employee who performed maintenance on Louis and the organ, and is now serving time in prison for “aggravated indecent liberties with a child and aggravated criminal sodomy.” Yep. He’s a pedophile who stole a child-size toy clown, the one that is sitting in that chair in a press conference with it s creepy, life-like hands stretched in front of it.

While we’re not quite sure how beloved Louis the Clown was that he had to receive a press conference, we do feel for the poor anchors of KSN, who justify their reporting on this story due to its buzz on social media. “Every day, we have to decide what news to report; the stories that really matter to you,” said one anchor, before going on to talk about how “thousands of people” clicked on a story about how a pedophile stole a toy clown.

Watch below via KSN:

Is it possible to feel even more creeped out by this story? Maybe this video of Louis the Clown in his glory days at Joyland will do it: