‘This Is CNN?’ Stewart Destroys His Favorite Target After A Chaotic End To A Terrible Week In Boston
VIDEO

‘This Is CNN?’ Stewart Destroys His Favorite Target After A Chaotic End To A Terrible Week In Boston 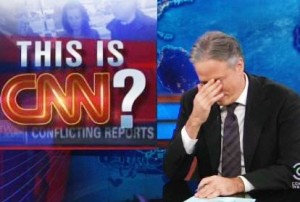 Another week of The Daily Show brought another round of Jon Stewart eviscerating CNN for its Boston Marathon bombing coverage Monday night. The host picked up where he left off last week, tearing into the network for its inane reporting during the massive manhunt on Friday.

After giving credit to NBC News and giving the New York Post some gentle ribbing, Stewart moved on to his primary target. He suspected CNN may have taken some of his advice from the week before, as they notably stopped speculating as much as they had been before the suspects were identified. “It’s a much more responsible way of broadcasting than your usual ‘say it first and have Anderson Cooper correct it later.'”

Stewart reserved special disdain for CNN reporter Deborah Feyerick, who had lot to say about some barking dogs. He said something his dog just “stares out the window and barks even when there’s nothing out there. Sometimes he licks his own genitals. You can’t always read a lot into what they do… news-wise.”

But even worse was CNN correspondent Susan Candiotti, who let this gem pass her lips about Boston under lockdown: “It’s as though a bomb had dropped somewhere.”

“Yes, it does seem like that sometimes,” Stewart said with his head in his hands. “It’s not so much a metaphor as, what actually happened.”