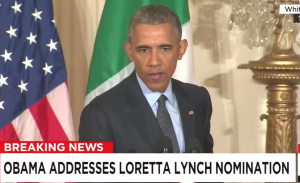 Obama, who was visibly furious with Republicans, called it a “crazy situation” that the vote for Lynch, who he said “everybody agrees is qualified,” is still being delayed after Obama nominated her last November.

“Nobody can describe a reason for it beyond political gamesmanship in the Senate on an issue that’s completely unrelated to her,” Obama said. “This is the top law enforcement job in the country … What are we doing here?”

Lynch’s confirmation has been the subject of an intense political back-and-forth in recent weeks. Just yesterday, Senate Minority Leader Harry Reid (D-NV) said he will force a vote if it is stalled any longer. Former New York City Mayor Rudy Giuliani (R) and likely GOP presidential candidate Jeb Bush called on Senate Republicans to stop the delay, and Senate Minority Whip Dick Durbin (D-IL) found himself in hot waterover his suggestion that Republicans were putting Lynch, an African-American, in the “back of the bus.”

“There are times where the dysfunction in the Senate just goes too far,” Obama continued. “This is an example of it. It’s gone too far. Enough. Enough. Call Loretta Lynch for a vote. Get her confirmed. Put her in place. Let her do her job. This is embarrassing, a process like this.”