This is How Sean Hannity Thinks WWIII Will Start… 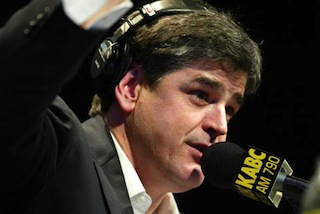 With the beating of war drums growing louder as the United States weighs intervention in the Syrian civil war, some are beginning to consider how intervention would impact America’s relationship with other nations which have an interest in preserving the Bashar al-Assad regime in Syria. On Tuesday, conservative radio host and Fox News Channel host Sean Hannity warned his audience that he could see the contours of a third world war that could triggered by U.S. intervention in Syria.

“And you’re seeing the formation now of what could very potentially be the next world war,” Hannity warned, “because it’s not just the Middle East that is radicalized.”

Hannity said that Israel will eventually face a moment in which it may have to mount another multi-front war, given the radicalization of its neighbors’ governments. “At some point, Israel is going to come under fire and good countries are going to have to come to its defense,” Hannity said. “But it’s going to be against radical Islam in all of its forms.”

“You can almost see this precipitating it, if in fact the U.S. strikes,” Hannity continued, “and Iran gets involved and Syria gets involved, and you’re going to see countries very quickly go down the middle and start taking sides. It has the potential to powder keg.”

Listen to the clip below via The Sean Hannity Show: