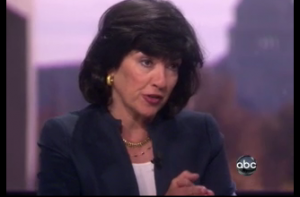 The ABC executive producer who guided the re-launch of This Week with new host Christiane Amanpour will leave the show at the end of the year.

As Ian Cameron has written below to his staff, he has decided to step down as executive producer of This Week at the end of the year. Ian has done an outstanding job at the helm of our Sunday program, first with George Stephanopoulos, and more recently with Christiane Amanpour. But it’s come at the expense of his time with his family on weekends, something he’s made clear for some time could not go on indefinitely. Last spring, he agreed to stay on to help with the introduction of the new version of This Week we began with Christiane. He accomplished what he set out to do, and we are in his debt.

We are grateful to Ian as well for his 13 years of excellent work in our Washington Bureau and on World News.

James Goldston has been working with Ian and me for several months on This Week, and at the end of the year he will take over day-to-day responsibilities for producing the program, relying on the capable This Week staff in Washington as well as integrating operations where it makes sense with the Nightline team.

Please join me in wishing Ian the very best as he moves to the next chapter of his fine career.

This Week, which struggled out of the gate with very low ratings after the handoff from caretaker host Jake Tapper, was the third-rated Sunday show last weekend, trailing NBC’s Meet the Press and CBS’s Face the Nation.

To the This Week Staff:

Having successfully launched This Week with Christiane Amanpour and with the busy mid-term election behind us, I believe the end of this year is the right time for me to move on from ABC News. As many of you know working weekends for the past two years has been difficult for my family. They have been both supportive and enormously patient, but now it’s time for me to return to a more regular schedule.

When Christiane Amanpour joined ABC news last spring, she enthusiastically asked me to continue as This Week’s Executive Producer. I was excited by the opportunity to work with such an accomplished and passionate journalist. Together, with all of you on the This Week team, we set out to broaden the mission of the program by capitalizing on Christiane’s lifetime experience as a reporter in the field and her passion for international affairs. Since we began on August 1st, I am proud that This Week with Christiane Amanpour has established itself as a distinct voice on Sunday mornings, going beyond the beltway to explore how policy affects the lives of Americans and beyond our border to explore how the fast-changing global environment shapes America and how US policy impact the world.

It’s with a mixture of pride and sadness that I leave ABC News after 13 years. As Washington Senior Producer for World News Tonight for seven years, I am grateful to Peter Jennings and Charles Gibson for giving me the opportunity to work with the most dedicated and talented team of reporters and producers here in the Washington bureau and across the news division.

I also want to thank George Stephanopoulos for inviting me to join This Week. It has been a privilege to contribute to the national political conversation and to work with ABC’s talented team of anchors and correspondents who hosted This Week during the interim period: Jake Tapper, Barbara Walters, Jon Karl, Terry Moran and Elizabeth Vargas.

Finally, I am deeply grateful to all of you – my colleagues and friends at This Week. Our editorial and production team, roundtable contributors and crew at the Newseum have consistently delivered the best program on Sunday mornings. Together, with Christiane in the anchor chair, I am certain that This Week with Christiane Amanpour will continue to break new ground and distinguish itself.

Meanwhile, we have some more broadcasts to do!