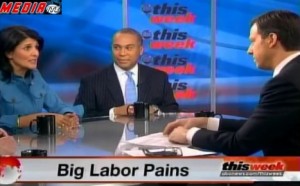 Viewers of Sunday’s This Week were treated to a powerhouse All-Gubernatorial round table consisting of Gov. Jan Brewer (R-AZ), Gov. Deval Patrick (D-MA), Gov. John Hickenlooper (D-CO), and Gov. Nikki Haley (R-SC), all moderated by popular fill-in Jake Tapper. Although the panel was ideologically mixed, you might not have known that given their response to this question: “Don’t you think it’s a little cowardly for the legislators — Democratic legislators in Indiana and Wisconsin just to have fled?”

As you can see, Deval Patrick wants nothing to do with the question, and Hickenlooper changes the subject (again) to restaurants:

Whether you agree with it or not, the Democratic legislators in Wisconsin (and later, Indiana) have a strong rationale for their actions that doesn’t include “cowardice,” yet the Democratic governors on This Week‘s panel declined numerous invitations to defend their disobedient comrades. Earlier in the show, SC Gov. Nikki Haley called the Dem legislators “cowardly,” and Tapper asked Hickenlooper to weigh in, only to be greeted with more advice on how to run a string of Applebee’s: (transcript via ABC News)

GOV. NIKKI HALEY, (R) SOUTH CAROLINA: …What I think the shame is the fact that you have got Democrat senators who represent the people of Wisconsin that have so cowardly that they left their own state. I think that’s an absolute slate on who should be thrown out of office as soon as they get back. It’s absolutely unfortunate.

GOV. JOHN HICKENHOOPER, (D) COLORADO: Well, you know, I spent a number of years in the restaurant business and sometimes we took over failing restaurants.

Hickenlooper and Patrick go on to make the case that cuts can be made without critically weakening collective bargaining, but never challenge the notion that slowing down this bullet train is “cowardly,” even when Tapper fairly begs them to, and even when Haley later goes in for the “double-tap,” saying “But let’s be clear, this was cowardly.”

The actions of the “Wisconsin 14” can fairly be called many things, but “cowardly” is probably the easiest of these to defend (if nothing else, the contrast between their disobedience and Gov. Scott Walker‘s plan to trick them back into the state would have sufficed), and the fact that none of the Democrats on the panel chose to do so speaks volumes about why Democrats so often find themselves on the wrong end of political floor-mopping. If they can’t defend their own party for what can be fairly seen as courageous obstruction of something the public overwhelmingly agrees with them on, then what chance do they ever have of shaking the “Swiffer Effect™?”